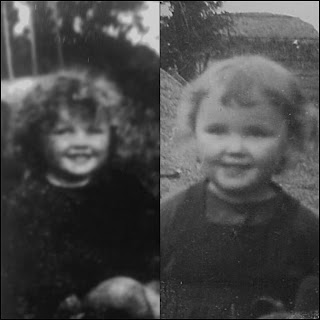 I'm always being told at family gatherings (usually funerals) that I am the very image of my mother. My standard reply is that I am not nearly as nice as she was. This is true, as Matty was a very lovely person indeed and greatly loved by very many people.

Judging by these two pictures, the first taken in the late 1920s and the second in the mid-1950s, I wasn't as pretty as her either although we are rather alike. Her's was the soft and sweet beauty of County Tyrone. Mine the sternness of North Antrim with a hint of the Scot and Eastern Europe. Our brows and eyes were inherited from Martha Donnelly of Randalstown. Matty's great-grandchild, Miss Martha H from Leek, Dublin, Randalstown, Gortin, Feystown, and God-knows-where else has that very same brow. And what did we all keep behind that brow? Something great, something amazing. A fine brain, keen intelligence, kindliness, wit, humour. And, last but not least, a modest demeanour.

That it is beautiful Mary.

You both look full of devilment.

I'd love to see a photo of you at a similar age. Apart from the colouring, I'd say you'd fit in well, devilment included!