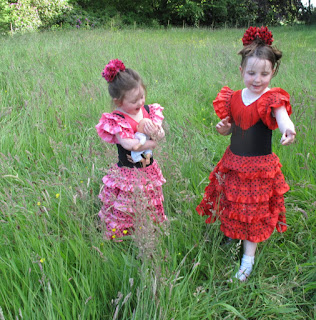 Back to buts was a frequent Mattyism. It meant a return to the usual. Bert is back from Spain and things are beginning to get back to normal. He had a lovely time and brought the girls some souvenir flamenco dresses. I think they are the dressing up equivalent of the big straw donkeys that holiday makers used to bring back from Spanish holidays. Now that baggage space on planes is so restricted there will be little demand for that sort of article.

There was great excitement at Clint's place today. He got a big swarm of bees landed on one of his bushes. Bert was called on to gather them up. This is the third swarm Clint's had in a month and he had no use for it. Swarming bees tend to be quiet so, as usual, he braved it without his beekeeping suit. And it worked out for him. No stings. When he returned he decided to check his own hive and donned the protective gear. Our hives are Irish black bees and they always seem to be very angry. The minute he went into the hive they attacked him. One stung him on the Adam's apple and he got four on his hands. I was pulling the sting out of his  neck and asked him,

I hadn't my gloves on.

How did they get you get stung on the neck?

I hadn't fastened the jacket up. I thought it would be all right if I was quick about it.

It's never all right with those bees. You're an eedgit.


Ah Bert. He's great entertainment value. It's good to have him back.