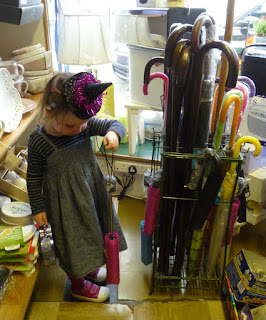 Martha has always had a keen interest in umbrellas

Apparently we are to expect a heatwave. Hopefully it will arrive by Thursday when Hannah and I are taking the Misses Martha and Evie to Portrush on the train. Martha is very excited because she knows that Barry's Amusements are in Portrush. I had to give her a little talk about this as she believes that Grannys and Aunts have unlimited pocketfuls and bagfuls and lorry loads of coins and flat money (notes) and that any unwillingness on our parts to part with this is just inexplicable perversity.

So I told her that we would be bringing a packed lunch, and that we would have just one ice cream and that all the rest of our money would be spent in Barry's going on dodgems, carousels and other exciting rides. We would definitely not be going into shops to buy pink tat.

For I made a mistake last Thursday after I met Martha from the school bus and she had no coat. This was unfortunate as I was expecting her to walk to the town centre with me so I could collect my new spectacles. She fretted about getting her pony tail wet because Mummy had plaited it so it would go all crinkly and if it got rained on the crinkles would come out. I thought the crinkles had already come out but I didn't like to say.

If it gets too rainy I'll buy you an umbrella.

It was just a light remark but you could almost hear her brain whirring into gear. She didn't hear idle words. She heard a solemn promise. She was fixated. I tried to fob her off with a magazine but she was having none of it. But I could buy Evie a magazine. Into a newsagents we marched and she spent long minutes deciding which magazine Evie (she) would like. Then it was off to the Tower Centre. I knew there was a bargain shop in there that might sell children's umbrellas and so there was. Pink ones. The Frozen characters, Elsa and the other one. Plastic. Tat. Five pounds. In no time at all I'd spent nearly eight pounds on nonsense. The girls didn't see it like that, Evie was as thrilled with her magazine as Martha was with her umbrella and sure, it's only money. It grows on trees.
Posted by Nelly at 11:09 pm