I woke up just after six a.m. and actually got up! There had been no word from Bert so I assume he had been allowed on the early morning plane that was taking him on a holiday to Majorca where Jazzer had rented a villa for the week.

So now I am home alone with only four dogs (Jazzer's dog is staying), two cats, two pigs, nine chickens and seven bastes. Bastes are what old-fashioned country folk call cattle. I don't have to do much with the cattle except keep an eye on Evil Edna and the bull.

Which one is Evil Edna?

The one with the long tail.


Apart from collecting the Guardian at the local garage I never left the house and it was bliss. No callers apart from Hector back and forth all day lifting hay. I gardened and made an omelette for lunch using the elephant garlic scapes that Les gave me for flavouring. It included the German salami we got from Bilrus and three kinds of tomatoes I also made a carrot and pepper soup this evening so am eating properly. So far. 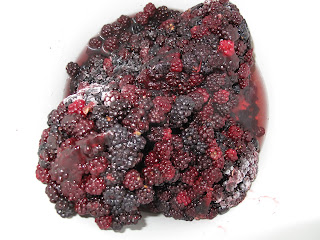 4 lbs of blackberries found in the freezer


I started a blackberry wine and bottled an elderberry wine. There was about a pint left over. When Les called round to water his garlic I shared it with him. Am now feeling very tired due to my early start and a busy day. One episode of The Newsroom a glass of wine and a bath and I shall retire.
Posted by Nelly at 9:42 pm

You are living large!

I think I could put up with the single life for a couple of days!

'a glass of wine and a bath' sounds like pure decadence!