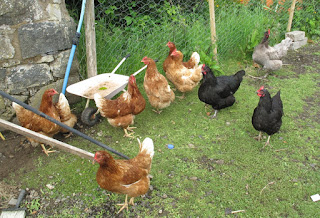 Part of the reason I write this blog is to remind myself what is going on in my life. When did I have the cataract operation? Look it up on the blog. Just over four weeks ago. When was the last time the fox got into the hen run? That would be in July 2012, and in the month of May 2008 and 2009. The May attacks were bad ones and, like this year, would most likely have been carried out by an adult fox with cubs to feed. We thought that the 2012 attack was a junior for on that occasion the hen survived.

This time we lost five in three separate incidents. Reminds me of Lady Bracknell for to lose two is unfortunate, five seems careless. Here's what happened. We kept them in the day after the first two were attacked. Foxy was interrupted and only got a bite or two of the rooster. Bert sprayed the weeds and brambles around the fence to see where it needed reinforcement. That was going to take a day or two to sort out. The day after I felt so sorry for them not getting out to forage and grub that I let them out and put Rusty and Lily in with them to deter Foxy. That worked. Foxy was not going to go into an enclosure with two great pigs in it. Had he done so I am certain that the pigs would have not paid him a bit of attention. I've mentioned before that pigs are rough and they managed to dislodge part of the chicken shed. It was the part that provided an escape route under the house. Two hens disappeared. We heard or saw absolutely nothing. I assume they went into the tangled undergrowth that lies between our place and the derelict, overgrown property next door. Where a fox was waiting. We were down to ten hens.

I had a plan. We would move them back to the old run, the one that no fox had entered for three years. We would do it on the following day after I had returned from some business in Ballymena and after a thorough inspection of the perimeter. Bert was in a hurry to get it done and persuaded me to move them before I left. He said he had sorted out the perimeter himself. With the help of a friend we moved the ten hens to their new home and I headed into town. Three hours later I returned to the news that the fox had got in and killed one of my favourite chickens, a big silvery grey girl.

The remaining nine have been closed in ever since and I feel so sorry for them. Bert is going away next week and there is not enough time to strengthen security. We'll get something sorted when he comes back.

He saw the brute yesterday at the edge of the wood. It gave him a cool stare. The gun was in the house.

I think you need Brighid to visit she might see the fox off in double quick time!

If only I could afford her air fare. I don't think she'd be that impressed with Bert's fire power.

Oh that stinks! That's a bold fox considering you have dogs. We use electric net fencing for our hens. Also, there's a lot of woodchucks for them to eat.

I would love to come over and drink Nelly wine and hunt a raiding fox. Not in that order, of course.

That is a bold fox. I was sitting in the sun the other evening reading my book and i spotted the cat going on alert. I got up to see what had caught his attention and there was Foxy actually in the yard! Electric fencing might be the answer. That or Brighid. No wine until he's hanging up by his heels.