I have grown bupthalmum speciosum* in my garden for many years now. More than ten? I'm not sure. Mine was sown from a packet of Thompson and Morgan seed and only two or three made it. It was enough. After a few years one plant had grown close to four foot and spread about the same. It was nearly too big. 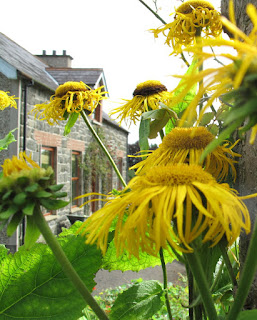 It's been divided a few times and bits passed on to other folk. Two years ago I really cut it back and split it into four, gave some to a couple of folk and stuck some close to a hedge where it has since been swallowed up by  wild raspberries. But that was before I became fascinated with the birds and the bees. Now I want bupthalmum everywhere because pollinators and butterflies adore it. 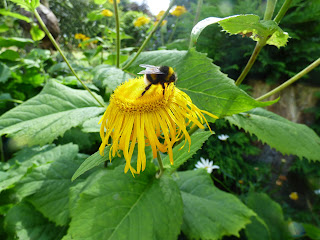 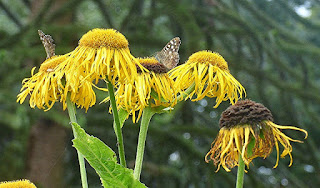 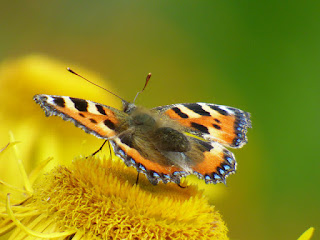 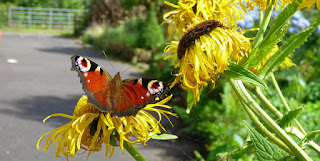 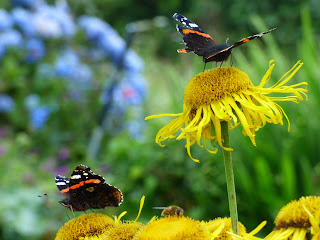 Time I was hacking into those wild raspberries and get those other two bupthalmums out of there. The bees and the butterflies will thank me for it.

*Also known as telekia speciosa
Posted by Nelly at 11:26 pm

Beautiful photos! I have comfrey all around for the same reason - the bees love it. I grew from seed a yarrow mix and have them in the veg garden as well as the flower beds. I'm a bit obsessed with feeding all the pollinators and butterflies!

Perhaps you will enjoy the rasberries too. Yes, glorious pictures. Thank you.

Susannah - I just started with comfrey this year. My daughter makes a comfrey brew to use as plant feed. I got some yarrow this year too but it is the decorative kind. I will have to look into that.

Mage - thanks for the compliment on the pictures. I enjoyed taking them. The raspberries aren't the best as they are in entirely the wrong place. Not enough sun! Meanwhile, out where the tame raspberries grow the wasps are having a feast.