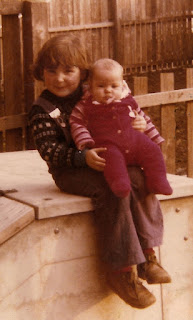 For the past eight months, I have been posting family group photographs on the Flickr photo-sharing website. Usually just one a day and in my own particular order. The family members are listed firstly by seniority and then alphabetically. That meant that the first postings were of an Anne and that everyone else in the picture would be younger than her. I'm nearly finished now, doing a Zoe and her juniors.

Mostly the project has been well-received by the family although I suppose they are the only ones actually interested in them. Sometimes I've failed to attribute the photographer but that's because I didn't know who it was for a good few of the pictures came from Matty's albums.

It's certainly brought back a lot of memories for me and not all of them are comfortable. Take that first picture for example. Zoe would be around four and a half years old, Katy about the same in months. They are sitting on a coal bunker and Zoe's feet are dangling more than a foot from the hard paved ground. I don't think I'd ever pose small children like that now as I'm far more risk-averse.

But back then, when I was in my mid-20s I was a very irresponsible parent. 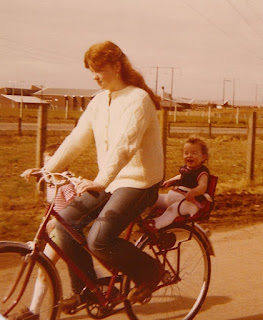 Not a helmet in sight. I'm sure that nowadays such reckless behaviour would be a matter for the police. 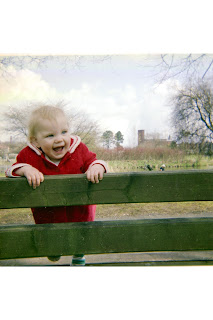 At first glance a happy little baby about five or six months old. But wait, is she standing up? The photographer (me) propped her up on the back of a park bench and ran round to snap the picture. Hannah did not fall over, roll off the bench, or hit her head on the hard ground. But she could have. I cringe to think of it.

It is little wonder that when Hannah reached her eighteenth birthday I breathed a sigh of relief. Made it! No danger of them being taken into care now.
Posted by Nelly at 11:17 pm