Rusty and the Broad Beans 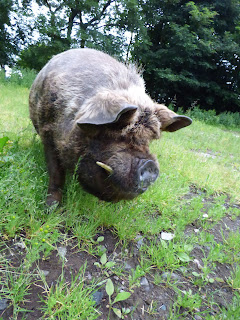 Free to good home, one crabbit kune kune pig. he took advantage of a thirty-minute window, squeezed his fat ass down a ditch and up through a hole in the hedge and into the polytunnel. He wasn't spotted until he was standing on the new lawn pondering crashing through my borders. We had a visitor, Richard who remarked,

Is piggy supposed to be in the garden?

I bet he's been in the polytunnel!


And while Richard and Bert tried to drive him off the garden I rushed to check on the vegetables in the tunnel.

It was my sobbing that interrupted their efforts and they left Rusty to see what had happened. The broad beans, all three beds were destroyed, the sweetcorn ploughed through and the beetroot plugs I'd carefully planted this morning were all trodden into the ground.

While Richard comforted me (Bert was useless) and helped me repair the damage to the sweetcorn, Bert went back to deal with the unruly pig only to find him in our actual home interfering with and overturning all the dog bowls. Eventually, he managed to get the rotten pig into his pen but it wasn't easy.

It was so disheartening. All the work that Zoe and I put into growing vegetables and that fucker can ruin it all in a matter of minutes. Getting pet pigs is probably one of the biggest mistakes we've ever made. They're only cute for about five minutes.

I'm all for fencing the vegetable area but Bert is not one bit supportive of that idea. He is very opposed to fencing for some reason which is why the pigs can come and go as they please in the first place!

I spent ages last week repairing the damage to the beans from the first pig attack and manage to save about half of them. A waste of time.

So, yet again, does anyone want a pig? Still free but also ugly, unmanageable and probably doesn't even taste very nice.
Posted by Nelly at 11:41 pm

So sorry about all your hard work being laid to waste.
I would be making bacon and ham out of that sucker in a heart beat.

I am so very sorry.

Brig, I reckon he'd be very fatty meat. Mage - we got over it but both swine are now in piggy jail.

As someone who grew up around a) farms, b) pigs, Bert is totally daft. Pigs without pens are a bigger menace than free ranging goats!

They're penned in now, that's for sure!