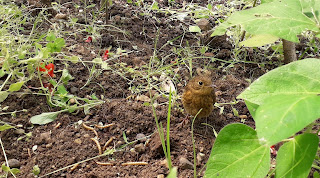 We have a family of robins that live in the polytunnel that Bert feeds with mealworms. Adult robins can be quite unafraid of people but the juveniles tend to be more timorous. Bert tells me that there is a young one that is unusually forward and will come very close to him when he produces the food.

My first encounter with it was when I was weeding the runner beans. It followed my busy hands at about a distance of half a metre showing no fear at all. The first picture was taken with my phone but I had to fetch the camera to take advantage of the zoom. 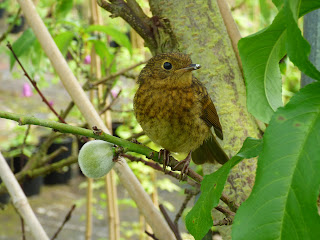 Here's  Robin sitting on a peach tree. Watching me, apparently fearless. I hardly needed to use the zoom lens. 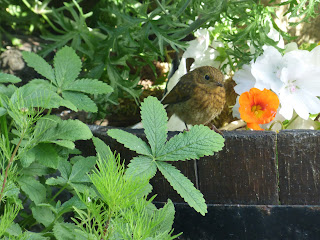 The following morning at around eight am I was sitting outside drinking coffee and eating a toasted pancake and I heard a little commotion and there he (or she?) was again. Once again the camera comes out. I've never met a bird so quiet in my life. 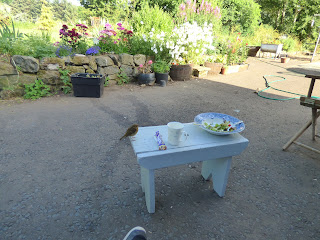 Robin was not offered pancake crumbs. I'm sure they'd be bad for it and I wouldn't want to encourage it to come to the house because of the cats. But it just came closer and closer. 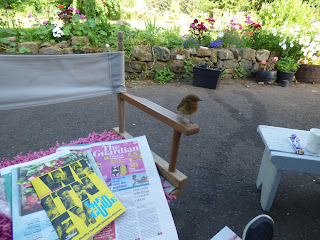 A tiny little creature like that should not be so unafraid of humans or dogs or cats. I feared it would not live long. 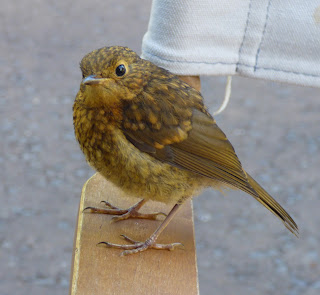 So delicate and vulnerable. Those tiny little legs seemed hardly strong enough to hold it. That was the last photograph I took. Friends came round and helped us make a paved area at the side of the new lawn. The robin fluttered around most of the day watching people work and swooped down occasionally to feast on the insects that they disturbed. Evening came and we did not see it again.

This morning Robin was nowhere to be seen. The adults were in the polytunnel as usual as were the other juveniles but no sign of the fearless one. Maybe a cat, maybe a sparrowhawk or a jay. We miss him.
Posted by Nelly at 11:55 pm

Don't give up hope, he may reappear. That is often a problem with young birds & mammals. I often reminded my grandkids not to touch babies in the wild, some will be abandoned if they have human scent on them.

There is no sign yet, not even a feather! The others and their parents are still around. I do agree and think that Bert made a mistake in encouraging the little one to come close to take mealworms.