Bert and I went shopping yesterday, himself for horticultural supplies and myself for light cotton trousers and some summer shoes. But first, we went for breakfast.

Then Bert said, pulling up outside a tool shop.

I'll just go in here for a minute to see what price their drills are.


I was a bit put out as I hadn't brought a book, for like my father before me, I'm quite content to wait anywhere as long as I have something to read. And there wasn't anything in the van, not even a tool catalogue.

Don't be too long will you? It's boiling hot in here even with the windows open.

I'll only be a minute.


A quarter of an hour later he came out no wiser than when he went in.

We were going to Junction One in Antrim and when we got there we split up. I went to Gap and bought a pair of cotton trousers. I spent a minute in another shop and went to the Nike store and started looking at white trainers. My phone rang. Bert.

Are you nearly finished? I'm parked outside and it's boiling hot.


I'd picked a pair and was on my way to pay for them. Five minutes later I was walking towards the van. It was open and he wasn't in it! I waited five minutes and phoned him. Tinkle, tinkle, ting-a-ling - and there was his phone on the dashboard. He really should change his ringtone. It's like something a little elf would choose.

I said nothing. We went home and I changed into my new trousers. So cool! Temperature-wise anyway. Maybe not Kate Moss cool. Hannah and I decided to take the dogs for a walk and once again piled into the van. We chose to go to Tardree Forest. It was so hot but better under the trees. 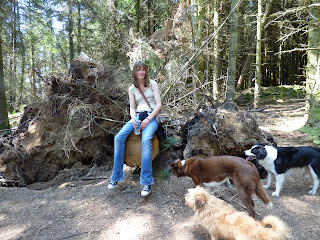 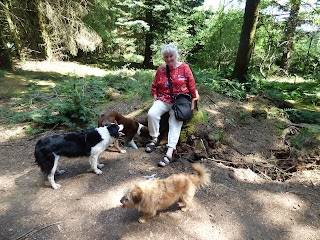 We spent an hour walking then returned to the van. I started to drive out. I'd noticed when we arrived that there was a steep gradient on the way down to the parking area and it was very dry and gravelly. I actually had to apply very light pressure to the brakes to prevent sliding. But the only thing I was concerned about on the way out was meeting an oncoming vehicle. That didn't happen but I found it difficult getting out onto the road. I almost made it but then had to reverse as there was oncoming traffic. Then it happened. I hit a deep ridge, stalled and the van started to slide back. And got layered on a dyke. When I got out to look I saw that one of the back wheels was halfway over the dyke. Thankfully I had managed to stop for there was a three-foot drop into the meadow below.  Panic!

Hannah was great. So calm. For someone needed to be. Then all these men appeared and they were wonderful. Calmed the whole situation down, reassured me that it wasn't too bad and eventually managed to get us back on to the road. It took a while too but they were so patient and helpful. Sam and Dave and Dominic. We will never forget you. 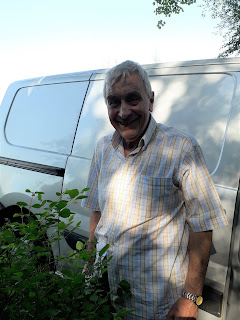 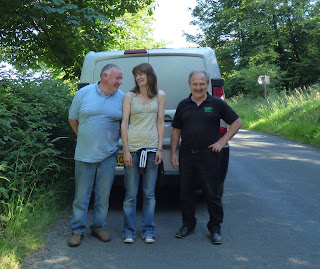 And what did Bert think of it all? I phoned him to let him know what was going on. Preparing him for the worst if worse it should be. And what did he say?

Are the dogs alright?


They were. Not one bit worried about the three unfamiliar men who were working with their van. Not even the smallest growl. They knew those decent fellows were there to help.
Posted by Nelly at 10:47 pm

Ahhhhhhhhh decent fellows indeed. Love the photo of Hannah and them - they look proud and mischievous. :)