In Praise Of The Master Electrical Engineer

Rachael loaned me a moth trap which is mine for an indefinite period, the only condition being that I must use it, record and report my findings.

I am notoriously afraid of new technology. I am the person who buys a new printer and keeps it unopened in the box for three months or more, before finding the courage to unpack it and try it out. This has happened more than once during my lifetime. A new phone? It will be weeks before I figure out all the amazing stuff it can do. Skype? A lovely idea but it frightens me. What's App calls? The stuff of nightmares. Eventually, I get there. When the stars are correctly aligned, when I can gather the necessary pluck. And so it was with the moth trap. I've had it for nearly two weeks and the only moth I've trapped was a little green and bronze one in the van yesterday. It has been photographed and has yet to be identified. Not even sure if it was a moth.

Rachael, not knowing the extent of my craven cowardice, did not help when she said,

Be careful how you move it, it's a bit delicate, hard to put together again if it falls apart - and the battery is a bit flaky. Might need a really good charge and then perhaps, another one.

Way to put off a technophobe.

I don't actually understand batteries, I know it is something to do with electricity which I also don't understand. Despite this, I decided today to charge the hell out of that flaky battery and get that moth trap on the road. So I did and when I connected the possibly charged battery to the unit that lit the fluorescent light nothing happened. Was it the charger? The battery? The bulb? How was I supposed to know? I hit Google.

The charger retailed at around £150. The battery? How much might that be? How did it all work anyway? I didn't mind spending some money. But how much? And on what?

Then in walked a Master Electrical Engineer. He didn't even get to sit down. Come here, said I. Showed him the moth trap, All he said was,

Can I have a star screwdriver and your reading glasses?

You should have said. I could have brought my *magical special instrument that solves all electrical mysteries*.

It was amazing. With the aid of my star screwdriver and my reading glasses he took everything apart, showed me how it all worked, told me about the light sensor and transformers which I didn't even know existed and offered several solutions to my problem which will involve no spending on my part. This man couldn't tell a moth from a midge yet he was ablaze with ideas as to how to actually activate a camera to take pictures of moths as they entered the trap.

I really must introduce him to Rachael.

I wish there was a decent photograph of that greeny bronzey flying creature I trapped in the van but all my pictures were terrible. Instead, I offer a snap of the garlic I sorted for seed and that I planted yesterday. 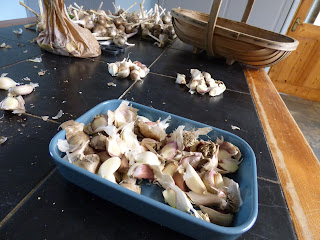 We love garlic heree. Electronics? She mutters shaking her head....I'm just like you, and if I ever figure something out, I cover it with post it's telling me how to run it.