Two trips to the dentist. Please don't ask. And in between a woodland walk and lunch with first daughter. 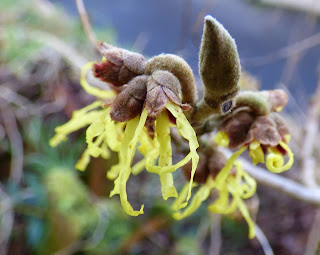 Then an evening chat with second daughter, the Norfolk one. There were also brief convos with Anglo-Irish grandchildren, James and Emily. James and I discussed trampolines and I'm not sure what Emily and I were talking about. She might have blown me a raspberry.

Third daughter got her foxy door knocker screwed on. 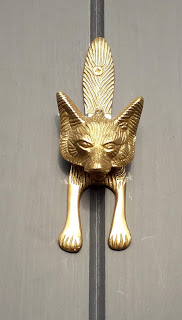 An Urban Fox relocates to Cullybackey

Now she's in with the hipster-crowd on Columbia Road, E2.

Then Bert and I watched The Holocaust Memorial Day Commemorative Service which was dignified and moving. Even hopeful.

From now on I'm not letting anyone, anyone at all get away with saying anything racist, sectarian or sexist. What should I say to anyone who does say anything like that?

Tell them they should be affronted at themselves.

Tell them that they are the sort of people who would have stood by and let genocide happen.
Posted by Nelly at 8:46 pm

Dentist. Twice. Ouch 😬 how is Hannah getting on in her own wee place. All going good I hope.

The only good thing about tw0 trips to the dentist is a cast-iron excuse for a nightly draught of fizzers/paracodal. Sleepy time. Hannah very happy with her new abode.