Some things never change much. There are still funerals to be attended and Swisser (since elevated to Professor) is still every bit as daft as academics are reputed to be. Because I am weary I am going to recycle (recycling is a good thing, is it not?) two posts from January 2010.

The Last Of The Line

On Tuesday my mother’s only brother passed in his sleep. He lived by himself but he was not alone as his nephew lived next door, his younger sister and her husband in the next house along and another nephew two doors down. So while he had his own home he also had plenty of company when he wanted it. He was a man of regular habits and it was his habit to go to his sister’s house every morning where family and neighbours would have a cup, discuss the events of the day and generally enjoy a bit of craic. On Tuesday he didn’t turn up and his sister knew something was amiss.

The doctor was called and pronounced that he had died sometime during the night and that his passing had been easy. Had he lived another day he would have been 79 years old. He was a man of strong faith and I’m told that he prayed for us all every day of his life. I don’t know what we are going to do when all the old ones are gone and we have no one to pray for us. I found myself thinking about that during Dessie’s funeral Mass and thinking too, that maybe I’ll have to take up the praying myself.

When they carried his coffin out of the house I told Bert that there would be no need for him to feel obliged to give it a lift as Dessie had enough nephews and nieces to carry him to Cork. Funerals are an occasion to see how all the cousins are getting on and I’m sorry to say that there are none of us getting any younger although most of us are wearing well. There was even, on Matty’s account, a creditable show of cousins from the other side of the family and it was good to see them there. Even the one who came up behind me outside the chapel and remarked,

Did ye sleep with the dog last night?

I can only assume she meant I was covered with dog hairs and I anxiously checked the matter with the Kerry Sister. She said that I was not and that she had given me the onceover herself before we’d left Matty’s house.

I never really answered the cousin as I was a bit surprised that she’d made the remark. It came across as unkind. I suppose if I was honest I could have said,

I did sleep with the dog as it happens but I wasn’t wearing my coat at the time.

Ah well. She showed the want of a kind old uncle to pray for her. I may have to add her to my list when I take it up myself.

Bert comes into the kitchen and tells me,

Swisser’s been showing me pictures of her vole.

Vole. What’s she on about?

Says there’s a vole in her back yard,

Says it’s been there for a week.

Says it sits on the windowsill and looks in at her. Says it twitches its whiskers. Says it’s a cute wee thing.

It doesn’t sit on her windowsill and look in at her!

Come and see the wee film she took.

I go into the other room and Swisser reaches me her phone. I watch a little film of a large brown rodent sniffling and zigzagging about in her herbaceous border, its big scaly tail snaking behind it. Sadly she has no footage of the charming creature sitting sweetly on her sill looking in at her. 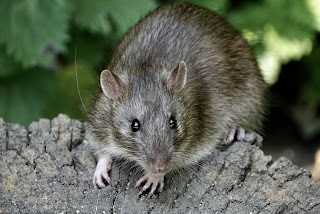