I was telling Bhrian about my serious sugar consumption over the holiday period. He told me about his healthy diet.

Porridge and fruit for breakfast, lunch is a salad, lean meat, a drizzle of ranch dressing.

Sounds good. What about dinner?

Then, I can't be bothered making myself anything, so I eat bits of everything that the kids are having. And - the leftovers, so maybe dinner is not so good.

Well. I've been eating industrial amounts of trans fats and sugar. I woke up the other night and my pulse was racing. I think I was having a panic attack.

Fats and sugar are the worst combination. So addictive.

I know. I read a short story once about a morbidly obese man who bought margarine and white sugar and mixed it into a paste and ate that. That makes me feel a tiny bit better about eating four mince pies today.

At this, Bert cuts in.

I hope you never have to go to an AA meeting. I can just hear you. Some poor addict would be talking about how much they were drinking and you'd be like - you drink gin straight from the bottle at eight in the morning!

They'd kick you out for being so judgy.

I'm not sure if the AA people would do that as I've never actually been to a meeting. Yet.

Then Bhrian told us about a short break he and the family took to Letterkenny after Christmas.

Did you all go?

Not the eighteen-year-old. He stayed home. The morning we were leaving he was practically pushing us out the door.

Bhrian described the holiday and it sounded idyllic. Lots of long walks on windswept beaches. I said,

I hardly know Letterkenny apart from passing through. But Uncle Vincent used to live there. He worked in a confectionery factory and I remember him telling us that if we only knew what went into sweets we'd never let them pass our lips. I was dying to know the details so pressed him on it and it seems that the vats of sugary stuff were very attractive to all sorts of flying insects and that they'd often end up in the finished product. Didn't put me off sweets one iota.

Probably made them even tastier.

Yea. Hygiene is bound to be greatly improved since the 1960s, no more wasps and flies in our chocolate caramels and now they're nowhere near as delicious.

Tomorrow I plan to have porridge and fruit for breakfast and I've already researched bean sprouting. I think there might be some mung beans at the back of the cupboard. They've only been there for about eight years but I'm sure they'll be fine. 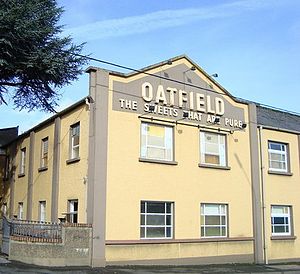 Good plan, I still have cake and two mince pies so have to delay my transition back to sensible eating!

I'm following Ganching's advice and postponing sensible eating until after her birthday!