Quidditch and Other Questions 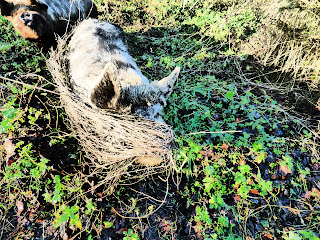 Bert's first utterance this morning was one of his random questions.

Do you know what Quidditch is?

Is it a sport?

Yea, sort of. It's semi-fantastical, played at Hogwarts. From Harry Potter. Why do you ask?

They were talking about it on some TV show last night.

Meanwhile - Miss Martha is going to have a Room Of Her Own. Which, incidentally, means so is Miss Evie, but because Martha is Moving Out that is a big deal. I was pleased that I guessed what her room will be called - The Cupboard Under The Stairs - for Martha is a Harry Potter fan too. Apparently, there is also a Harry Potter-themed password before entry to Martha's room will be granted. I didn't guess that which is probably just as well as who wants one's granny barging into one's room uninvited?

That photograph of Lily was taken this morning. Both pigs were allowed in the orchard this morning and after they got bored gorging on windfalls Lily stripped a pinus of whatever it was that covered it during the summer. Maybe bindweed, so hopefully, that's not very poisonous for hogs.

Meanwhile - it's New Year's Eve and we are Nellybert, Hannah, The Banjos and Sarah and five dogs. The evening is still young. Unlike me. I remember reading 1984 when I was sixteen and thinking that was the scary, scary future.

Anyways, if you are still here, have a Happy New Year. Someone's bound to have one. Hope it's you.
Posted by Nelly at 8:03 pm

Happy New Year to all!