In Which Bert Is A Great Big Tease

Evie told me that Bert calls her pink booster seat a 'wedding chair'.

Why does he say that?

He says I'm too big for it. He says I'll still be sitting on it when I go to my wedding.

Well, that's not very nice of him. What did you say?

I told him I'm not even going to have a wedding. It costs too much money. I'm just going to live with somebody.

A sad day for hens. One died of natural causes and four by a fox. Needless to say, all roosters survived. Bert saw the arrogant brute this morning and considered shooting him but decided not to. We were letting the hens out to wander the yard every afternoon so our fault. 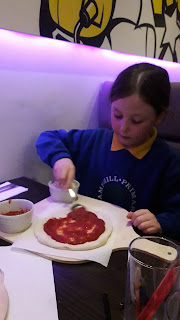 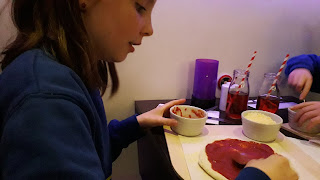 We took Martha and Evie for dinner at the Pizza Parlour. It has changed hands and moved premises but the pizzas are still as good as ever. Bert ordered a large anchovy and olive and was almost beaten by it. I said, "Why don't you take a little break, then go back to it?" He said, "Yeah. That's what Italians do." I said, "And while they're taking their break they slip out of the restaurant and whack someone." He said, "While everyone else in the restaurant laughs loudly at silly jokes and no-one hears a thing."

Full disclosure, we just watched The Irishman, then GoodFellas, Bert for the fourth time, me for the first. I'd only ever caught the scene where Christopher from The Sopranos got his foot shot at by Joe Pesci, so sorry Italian-Americans for the lazy stereotyping, blame Martin Scorsese.

Whilst uploading the Pizza Parlour photos from my phone I came across one on the family WhatsApp page, shared by my brother, a photograph of his beautiful first grandchild who died in September. There will have to be a new kind of Christmas in Ava's family, one where there will always be someone very special missing. It's going to be hard.
Posted by Nelly at 11:20 pm