London is not like Northern Ireland, you wouldn't even know there was a General Election coming up. No posters anywhere, except for a few in people's windows, and all of those were supporting Labour. Somehow, I managed to avoid meeting any obvious Tories while I was there.

You'll be wondering if I went only to Islington North and stayed put but that is not what happened for I travelled widely around the capital beginning in Tottenham Hale, passing through Finsbury Park on the way to Muswell Hill. People sleep rough under the bridge at Finsbury Park which is a sobering sight. From Finsbury Park to Muswell Hill we passed the Old Dairy in Crouch Hill, which in the eighties was opposite flats where all four of my sisters used to live. The building has been gentrified and is now a restaurant. 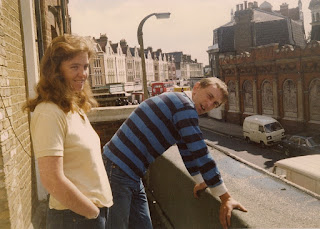 Deirdre and Bert in Crouch Hill, the Old Dairy, sometime in the 1980s 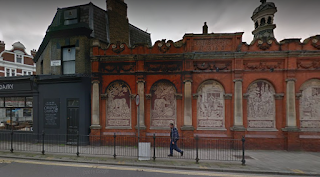 The Old Dairy dates from the early 1890s. This recent photo is from Google Maps.

I decided this time that I wouldn't visit galleries or museums. Rather, I would walk lots and just soak up the atmosphere and history of the city. History is everywhere.

I remember Matty was very taken by the dairy. I think it tickled her that a building associated with farming was located in the heart of a huge city. But city folks like milk too and back in the 19th century it just wasn't possible for everyone to have their own cow. London contained a good number of dairies and herds of milking cows were to be found throughout the city. The Friern Manor Dairy Company which owned the building in Crouch Hill was one of many. Their cows were grazed and milked in Peckham, the milk distributed from churns and ladled into the customer's own jug.

London Sister, who once lived in Crouch Hill with Ganching, Kerry Sister and Leitrim Sister, is still not that far from an old dairy. In 1915 Manor Farm Dairy sold milk and poultry from this building in Muswell Hill. 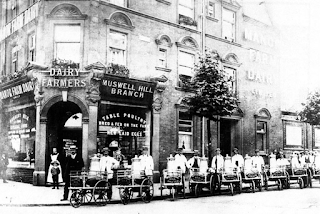 One hundred years later, yet another of life's basic essentials was being sold from the same building. 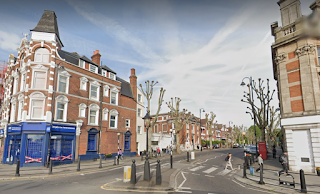 I definitely preferred the original entrance.

I didn't know most of this! Very interesting. Also don't recognise the location of the Muswell Hill building?

It's on Broadway. Knowing Google Maps it's possible Carphone Warehouse has relocated but the building will still be there.