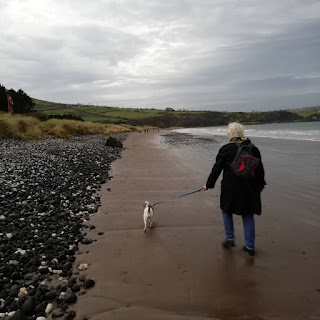 Lulu and Nelly on Waterfoot Beach

Nellybert entertained Vancouver Brother for a few days over the holiday. All the cooking on Christmas Eve and Christmas Day was my own effort and turned out very well. After lunch, we watched a TV programme about a steam train travelling on the Highland Railway from Fort William to Mallaig. It was relaxing, no narrative, just the choo-choo, clacking sound of the train and the gentle snoring of Eamon and Bert.

Brother Joe* had recommended The Two Popes so I watched it on Netflix with Leitrim Sister and Bert and enjoyed it. That night, before I went to sleep, I found myself yearning for that certainty of belief. Maybe that's what is needed to make my life better. I opened my arms and my heart and asked for guidance. Then I dreamed that I lived under a harsh, totalitarian regime. Guidance? Or a glimpse of the future that awaits us under The World King?

Between all the eating, drinking and lying around it was definitely time for a nice walk. Leitrim Sister, Lulu the Jack Russell Terrier and I headed off to Waterfoot beach. It was lovely, Lulu made lots of new friends, some of whom were giants. 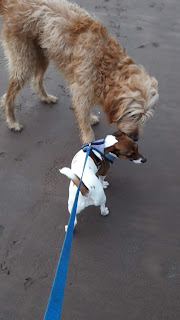 There was just one thing that spoiled it. There were at least five children who had been given quad bikes for Christmas (Bad Santa) and they were churning around, driving like crazy on the beach and, worse than that, riding over the dunes while their foolish parents looked on indulgently. Waterfoot beach is a conservation area. I might need to pen a letter of complaint to the World King, who (I'm told) is a keen conservationist. Failing that, a letter to Moyle District Council might suffice. Ach! Who am I kidding? As long as there are stupid, irresponsible parents, there will be wrecking children. And while I'm on this rant, come May, keep your wee shites off the bluebells!

Write that letter to Moyle Council!