Yesterday's election did not bring me the result that I'd hoped for. I didn't even want that much, just a reality check for the DUP and a hung parliament in Westminster. I got the first, but not the second. Mr Johnson got his majority and all who voted for him will get their Brexit Done. Enjoy, peeps - it is going to be quite a ride.

I'm not going to get depressed about it, not yet anyway. Maybe things will be OK and, hey! Christmas is coming. I'm not even that much of a Christmas fan but this year I'm going to make the most of it.

Now, I'd like to share with the several people that come to Nelly's Garden some of my thoughts about the political system in this place where I live.

Firstly, it makes me very cross when people say things like,

Politicians! They're all the same. Just out for themselves.

I disagree. Of course, there are some, maybe too many, who might give this impression but I believe that most people who go into politics do so for the right reasons, those reasons being a desire to serve their community, and to make society a better place, for the many, not the few.

Another thing that bothers me is folk that don't vote. I know some and they are mostly very good people and part of me understands their disillusionment with the political process but, for fuck's sake, just vote! It won't kill you.

Living in Northern Ireland and having experienced the abandonment of FPTP voting for proportional representation has me believing that the UK is long overdue electoral reform. It would lead to much fairer representation for everyone. Parties such as the Greens are extremely underrepresented despite receiving a significant amount of votes nationwide. Obviously, this would not be an attractive proposition for the leading parties but I think it would make for a more balanced government, where everyone's voice had a better chance of being heard.

Now, I'm an oldie but this made me think. It was a while ago, back in the days of Theresa May and 'Brexit Means Brexit'. I was listening to a phone-in on Radio 4 and a  woman called on behalf of her parents who were so disappointed that their vote to leave the EU had not yet been implemented. The two old souls were so disillusioned that they were considering leaving the Conservative Party. The phone-in host enquired as to the age of the woman's parents. She replied ninety-two and ninety-four. I was amazed. Call me ageist all you wish but why were people in what is likely the last decade of their lives doing concerning themselves about a process that they will never see completed? This is why young people need to use their vote. Because of these old Tories who are certain to use theirs and they don't give one damn what life is going to be like for the generations coming behind them. Not one damn. 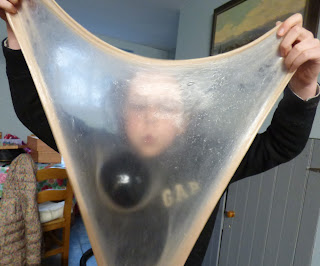 How Martha spent election day, making and playing with slime. She's ten. In eight years time, I hope she'll be out there taking her place in the world, changing it for the better.
Posted by Nelly at 10:27 pm