Who Is It This Time? 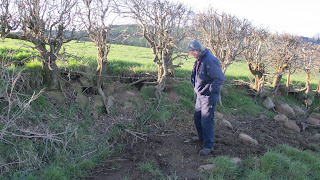 Bert thought this might be a fox hole and maybe it once was. He said it's been around for years or since he was a wee lad. That's decades, half a century's worth. 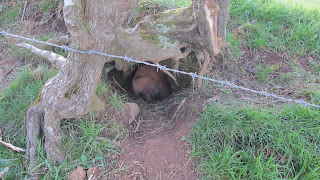 Ziggy decided to investigate. That's the last picture I took as the noises that emanated from that tunnel were worrying. He was barking and something else was chittering. He emerged, arse first and the something else was right behind him making frantic chirping noises. It was a badger. Out Ziggy came and made then moves to go right back in again. We tried to discourage him and eventually had to pick him up and carry him away from the area.

Checked YouTube when I got back home to make sure that the chittering noises we heard were badger. I had no idea how many and varied are the sounds that badgers make.

And there was me always used to think that they spoke like this,

"Now, the very next time this happens," said a gruff and suspicious voice, "I shall be exceedingly angry. Who is it this time, disturbing people on such a night? Speak up!" 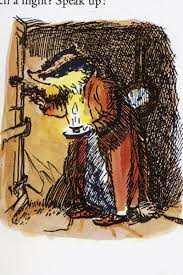 During these strange times, I'm feeling rather badger-like too.

Don't think I have ever seen a badger, I'd like to!

I don't believe I've ever seen a live one. Unfortunately far too many killed on the road.