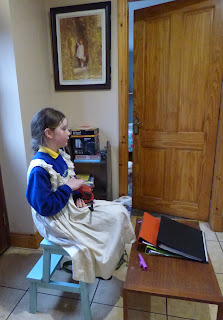 Bert wasn't at home when the girls arrived today. They were out of school early and had their homework done and despite the heavy rain there was no mention of Netflix. It was straight under the stairs to pull out the dressing up boxes. Favourite outfits are a cross between Jane Eyre and Little House on the Prairie. Today they were playing school and were all over the place looking for folders, pens and vintage books. Martha has always preferred "old books with tiny writing" and Evie's choice would be pocket-sized volumes from The Observer's range.

Then Bert came back. They were at him immediately.

Bert! Bert you're playing with us. We're playing schools. I'm Sunny and Evie is Holly. We're head girls! You're Bud, Bud Sorenson and in this game, you're not stupid, you're clever, You're head boy. We're going to do projects and then we're going to do a presentation!


He was allowed to have a coffee before the game began and from then on it was upstairs, downstairs, in my lady's chamber. While all this was going on I was making food. 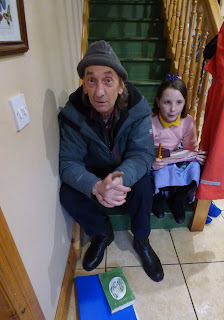 Bud and Sunny await their turn


Listening to them was great entertainment. Martha, a born performer, played the kazoo and tap-danced. Bert discussed the book he had 'read', E. Nesbitt's The Wonderful Garden,

I read this book. It had nice pictures. I liked it very much.


It seemed to please them enough. Sadly, I did not hear Evie's presentation which occurred moments after I took the pictures as I'd gone outside.

Playing school might be a popular game in the coming weeks as they are likely to be off and will be missing the real thing. We're living through a rare time. It will soon be time to hunker down and isolate.
Posted by Nelly at 11:01 pm

Two very lucky girls to have you xx

And, goes without saying, lucky for us to have them.