A Wee Day Out 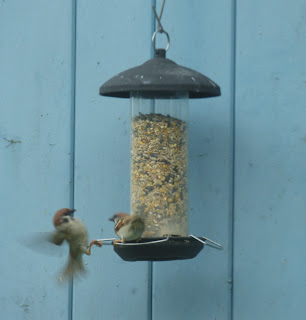 I never used to worry about leaving this place unattended. Just get in the vehicle and drive away with never a thought. These days it is all careful locking up, anxieties about the pigs and hens, maybe somebody coming on to the yard, stealing tools, equipment, plants. It must be something to do with getting older. And it is part of the reason that Nellybert outings are too few and far between.

But today we went out for breakfast, a plant delivery to Montrose, a trip to the supermarket and a jaunt to McNeill's in Broughshane for bird food.

As I remarked to Bert the other day, the wee boys' grocery bill is nearly as much as our own - the amount we are spending on mixed seed, nyger seed and sunflower hearts and that's us with a field full of grasses going to seed at the front of the house, it is little wonder the wee boys are becoming so numerous. 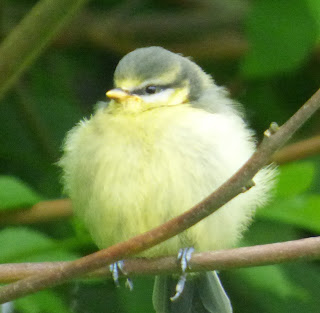 This one has just left the nest. Both parents spent half an hour toing and froing from the fat ball cage feeding it titbits. Bert wondered about the other nestlings but I reckoned this one, the first out, was their pride and joy, their big hope for the future and they were going to put the effort in. Even if it killed them. 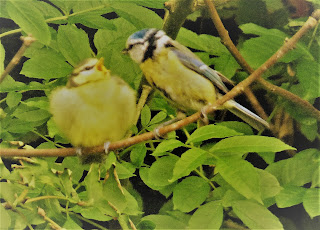 We returned from our jaunt to find the place unburgled, unburnt, and unflooded. The wee boys had their feeders loaded and it seems that they prefer the grub they get from Ronnie in Portglenone to Jimmy's in Broughshane. They'll have to get used to it though as we bought 20kg.
The only thing was, we seem to have lost a hen. Maybe Foxy. I'll know for sure at bedtime.
Tomorrow I'm going out again, first to pick up Jazzer and go to lunch, then pick up the schoolies. It's going to be a fun day.
Posted by Nelly at 8:30 pm