I decided to move my primary bird feeder. It had been placed in the position that Pearlie had enjoyed, just outside the window that she could view from her hospital bed. I don't know which she liked the most, watching the wee boys eating the peanuts, or bossing Bert to keep the feeder full. Back in Pearlie's day, it was all about peanuts and fatballs but I like to provide a variety of seeds and mealworms too.

The problem with a feeder close to the house is that it makes life easier for the cats. They are both old now and not such active hunters but if there are going to be small birds strolling around the front door gathering up the overspill from feeders, and especially if those birds are this year's breeding and short on sense, then it is much easier pickings for Holly and Fred.

Still, we got to June before we had a fatality. I'm not even sure what it was as Fred had the head and breast devoured before Bert alerted me to his crime. I went out to him, caught him in the act and as there just happened to be a vat of rainwater and a bucket sitting handy, I filled the bucket and drenched the murderous bastard. That disturbed him at his repast.

I did try to identify it by the wings and tail feathers but not sure. Possibly some sort of a tit. I thought of posting a picture of the remains on Facebook but decided against it as,

(a) it won't bring it back and

So I moved the feeder to the shepherd's hut. High enough to deter cats and close to a big thick hedge. 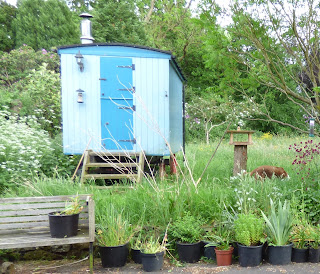 It was only there moments before the birds found it. The first caller was a great tit. 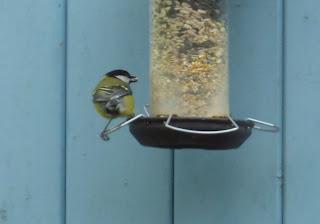 Quickly joined by a goldfinch. 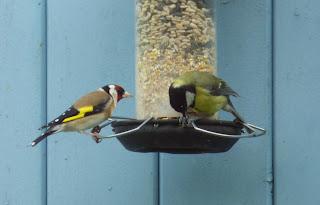 Then my current favourite birds... 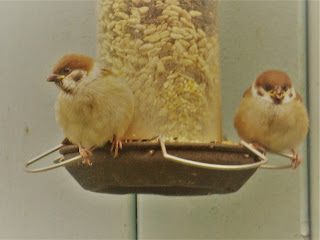 Yes, I used to hate that. Sterling would bring them home alive, and I would have to do a catch and release.

At least they were alive. Fred just bit it's head off and it took a while to identify. We reckon it was a young pied wagtail. Bert was raging as they are his favourites.