One month and a day ago Helen, my favourite hen, disappeared from the hen run.

...we had a call from Clint. Apparently, there were a lot of hens wandering the road in front of the primary school. Anything to do with us? I checked and all my hens were home. Except for Helen. I spent an hour looking for her but no joy. And to think that only a few hours earlier Evie and I had been in the run hand-feeding her RJ Kerr soda bread.

Perhaps she'd turn up in the morning. Perhaps she choked on the soda and died. Perhaps Foxy…?

But she did not turn up in the morning. 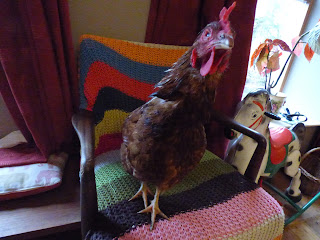 I'd looked everywhere that evening, poked through the extensive nettle patch at the bottom of the run, looked under every gooseberry and blackcurrant bush but there wasn't a sign of her - until today. It was Evie who found her remains beneath the biggest blackcurrant bush right next to the hen house. I raked her out and Bert took her off for a decent burial in the midden. Poor Helen. I wonder if it was the soda bread?
Martha is staying with us tonight and she is currently hogging the TV. Under Bert's very nose she opened her own iPlayer account so she could watch junior telly. I advised her that it would be mannerly not to make changes to our devices without first asking permission. She agreed in principle. Tomorrow we are getting up early and taking the train to Belfast. We are both looking forward to it. Will take my mind off Helen.
Posted by Nelly at 9:34 pm

Sorry about your hen, I guess they are very vulnerable

Very true. I had to put another in the sick bay this evening. Being picked on.

At least you know. Belfast will be a nice break from it all.