I wrote Sister Benedicta over fifteen years ago. I'm so glad that my oldest granddaughter, going to her new school in September will not experience anything like this.

By the way, that being on the brink of ruin period did come to an end soon afterwards. It is just unfortunate that it coincided with my starting grammar school. Another thing, although I never told my mother about charity collections or sports kit I always asked for and got my art supplies. I had priorities. 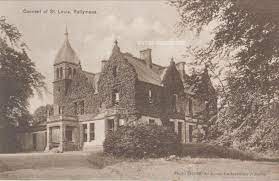 For most of his life, my father had two jobs. He was a HGV lorry driver and a farmer. There was a time just a few years after he bought the farm when things did not go well for him. He had replaced his old faithful ERF truck with a more modern Seddon-Atkinson lorry. And this lorry gave him a lot of problems. He was sold a pup. And because he was self-employed he earned no money on the days that the lorry was broken down. That would have been bad enough but then there was also a run of bad luck on the farm. He lost a bullock in a freak accident; a cow died calving and there was a run of dead calves. This left my parents with a lot of financial worries, which my mother confided in me. In hindsight, she realises she probably shouldn’t have because I was only 11 or so and took it very much to heart.

What did that mean? I hardly dared to ask. I couldn’t comprehend what losing the house might mean. Maybe living with Granny? Horrible thought. As for ‘very poor’ I thought I knew what that meant. It meant nothing to eat but dry bread and water, crying hungry children, being barefoot in the snow and no Christmas presents.I remember praying very hard in Chapel that we would not starve. Then I passed the 11+ and I was going to The Convent. I knew Mammy was worried about the price of the uniform but she got it all anyway except for the jumper and the scarf, which the nuns sold themselves at a ridiculously high price.So I started The Convent. Maybe it was nerves or maybe it was a particularly chilly September but it was very cold. The uniform was so cheap and shoddy you could have spat through it. The rumour was that McKillen's bought it in for a pittance, sold it to us for a fortune and gave the nuns a kickback. The blazers were warm enough. They were probably made from the bits of felted up wool sweepings from the Lancashire factory floors, dyed navy blue and sewed into an ugly box-shaped garment with a posh badge and braid added on afterwards to give it a bit of ‘class’. But the sadistic nuns didn’t allow us to wear the blazers inside so we froze. They kept the central heating turned off too. Within a couple of days at least half the girls had bought a school jumper.After the first week, there were only a dozen of us without the jumper. I was so cold I could hardly think. By the end of September, there were just two of us, myself and a girl called Eilish. And then there was just me. My humiliation was total. Or so I thought. For there was a lot more to come.Mammy finally scraped the money together to get me the jumper in October. I honestly don’t remember what it cost but it would probably have bought her enough wool to knit the entire family jumpers. Oh aye, I forgot to mention that we weren’t allowed to have home knit jumpers.Oh, The Convent! It was money, money, money all the time. At least once a week Sister Diabolical would sweep into our classrooms and announce that we were taking up a collection for the poor starving Black Babies in Africa or the poor starving White Babies in Dublin and we were all to bring in at least two shillings the next day. We were to ask our mothers as soon as we got home. Of course, I never mentioned this to my mother for fear of worrying her and then got roundly humiliated the next day when they took up the collection.Then there was the PE kit. We were to have tennis rackets, hockey sticks, this kind of a skirt, that kind of shoes. Once again this was never named by me at home. So I spent my entire first year in an agony of shame and dread and consequently never learned a thing.Then Sister Benedicta took a pick on me. She thought I was a scruffy tyke and she was right. She sent me out of class one day to comb my hair.

“Nelly Moser, your hair is a disgrace. Go to the washroom right now and comb it!”

So I went to the washroom and looked in the glass. My hair was untidy, too curly and tangly. I had no comb so I tried to fix it with my fingers but it was no good. I was terrified going back to class because I thought she’d have another go at me but she never even noticed my hair was no different.Then there were Sister Diabolical’s surprise fingernail inspections. She’d sweep in and go round everyone and inspect our fingernails. Humiliation for anyone whose nails were less than pristine. We’d all be frantically using compass points to clean them before she got to us. Once after failing inspection, I got sent to the washroom to give them a good scrub and when I got there I scrubbed and scrubbed till they were nearly bleeding. Then Sister Benedicta nobbled me at break time for having all these white soap flecks on my jumper.

“Nelly Moser, you dirty, dirty girl. You’ve been eating ice cream and got it all over yourself!”

As if. As if I had the money for ice cream.In those days it was a small school with just two streams. We’d all been streamed on the first day. The second class was for those who’d scored less well on the initial tests and a lot of them were being paid for anyway because they hadn’t passed the scholarship. But at least their families were wealthy enough to afford the fees.After the first year, I got put into the second stream because I’d performed poorly in my end of year tests. I was mortified but in the good old Convent tradition more was to come. Sister Benedicta was our form teacher. She introduced an encouraging little ritual to motivate us to be smart and tidy schoolgirls. At the end of every month, she’d have a class prize for the most well-turned-out girl. And while she was about it there would be a dishonourable mention for the least well turned out. The prizes were nothing to get excited about – maybe a holy picture or a cheap set of rosary beads. Anyways Mary Teresa won it the first month. Her father was a wealthy businessman and she got a new uniform every term. I got the dishonourable mention. The second month Mary Catherine won it. I got the dishonourable mention. The third time it was Mary Teresa yet again and myself for the booby. After the Christmas term, Sister Benedicta got bored with her little scheme and it was never mentioned again. Maybe she just got bored of humiliating me because by that time I’d gone numb and had stopped reacting. Bullies need a reaction.I begged and begged Mammy to let me leave after the third year. I told her they’d probably throw me out anyway. I did no revision for Junior Cert and failed Math, French, Irish, Geography and History. The parents relented and I went to Antrim Tech to do a pre-Nursing course. I learned to enjoy school again and when I wasn’t top of the class I was second. I also smartened up my act and became one of the most well-groomed girls in my class.Incidentally, Sister Benedicta was her real name. She’s probably dead now. I don’t really care.