My sister the bride observed the tradition of not meeting with her husband on union day until the very moment they met before the registrar. So the groom stayed at a hotel in Muswell Hill the night before the wedding. He wasn’t too lonely as there were ten of the wedding party staying there too. I can report that the condemned man ate a hearty breakfast. 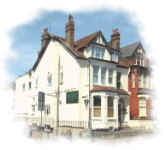 Muswell Hill is a good place to stay. It’s very good for cab-riding pensioners who have no intention of getting on a tube. Which was just as well as the nearest tube station is a smart ten minutes walk away from where we stayed. On the other hand the hotel was a five-minute stroll from a fine shopping area full of excellent shops and restaurants. To Matty’s delight there were even three charity shops. To Aunt’s delight there were lots of much more expensive shops. Uncle was stoic about it all as he can’t be bothered with any kind of shops at all.

As you’d expect it’s rather steep up around Muswell Hill and Highgate. It means that you can look down on the Thames valley and the City. I got my first glimpse of the Gherkin from Muswell Hill Broadway. 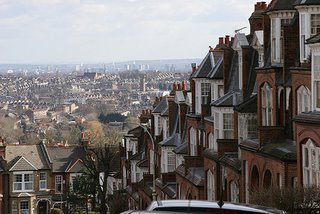 City View
The hotel wasn’t far from Highgate Wood. On the hottest June day in about a hundred years I took a relatively cool walk through the woods. But even the squirrels in there were lolling around fanning themselves. 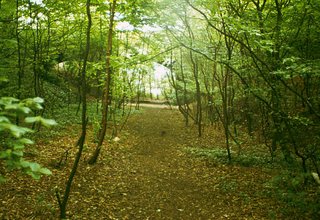 Of course the area is steeped in history. Muswell Hill was once part of the Forest of Middlesex and the present day wood is a remnant of that ancient forest. Its views over the Thames and Lee valleys have made it a very pleasant place to live over the centuries, providing a rural, wooded retreat for those who could afford it. It escaped urbanisation until the very end of the nineteenth century.

But the Muswell Hill area has had some recent unpleasant history too. Just around the corner from the hotel is Cranley Gardens, where Dennis Nilsen’s career as a serial killer came to an end. 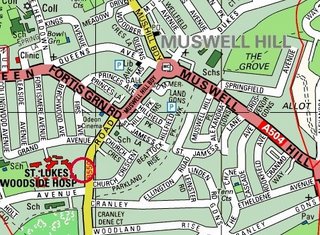 The hotel is circled red. The wood begins on in the SW corner of the map. Cranley Gardens is just across the road. I didn't go there.

Last time B and I went to London for a weekend he never left the place. Cappucinos and wood walking did him for the trip while I ran around like a mad woman.

Glad you made it back to the peninsula in one piece.