Bert has been forbidden to put anything in the attic.

If you want something taken up there, leave it by the stairs and I'll take it up.


Why? Because he just dumps things there willy-nilly on top of all the other stuff and I have to move it to get to the stuff I want. He's been storing outgrown children equipment such as buggies, stair gates and so on for we're hoping for more grandchildren some day. I've been digging out china, and pretty cushions and knick knacks that have been up there since Pearlie moved in with us. For my new room you see. The new room that I keep going on about.

You can be certain sure that Bert will not pay a blind bit of notice to my instructions that he keep out of the attic. He agrees with me, then does exactly as he pleases and I have to admit I do admire him for it.

Bringing out the china has awakened my interest in it and I found myself drawn to a vintage coffee set in a Ballymena charity shop. It looked in very good condition considering it must be close to a century old. 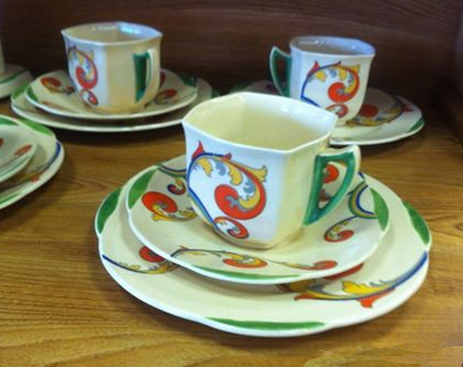 Sadly I could not afford it as it was priced at £395! There aren't as many bargains to be found in charity shops these days, not since the people who work there discovered eBay and the prices that some collectors are prepared to pay.

But I did have a happy find in Portglenone a few days later. I have a few bits and pieces of Poole Pottery Dorset Fruits. It's modern but I like it. I'd been poking about and was about to leave empty handed when the nice lady said,


Four Poole Pottery, Dorset Fruits dinner plates, the apple pattern. How much did she want for them? Fifty pence each.

Now if I only have six adults and two children for Christmas there will be plates enough. Six apples, a pear and a bunch of grapes. 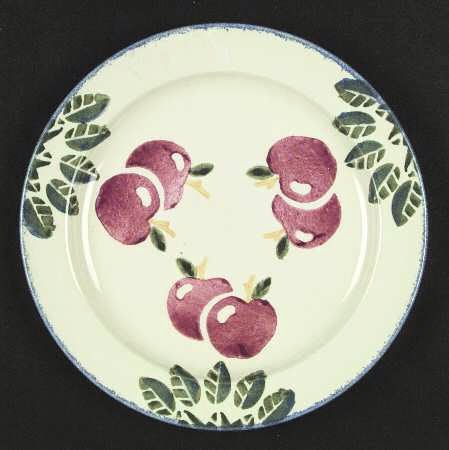 I do like that coffee set, but I have more than enough crockery for a car boot sale and I know Elly has no interest whatsoever in any of it.

Time for me to start clearing.

I read that too quickly and got the impression you had so much delpht you had to keep some of it in the boot (trunk) of your car!

The older set is stunning. The apple plate is flat out charming. This new room is going to be wonderful.

I wish I owned the art deco set but it was too pricey for me.

Charity shops get it really wrong when they overprice stuff as the chances of anyone with that kind of money coming into buy something is slim. They should put it on eBay or sell it to a dealer if they want to make lots of money. It is pretty but not hundreds of pounds pretty.

I agree. They look at the price of stuff on eBay and think they can get it in the shop. eBay does not reflect an item's real value. If it is a popular collectible and lots of people want it prices often get silly and I should know!