Rather than be late for my date with the doctor we ended up being more than an hour early so we had morning coffee and scones in the Europa Hotel. It was sweet to be sitting in the Piano Bar watching and looking out at Robinson's and the Crown Bar. Belfast looked beautiful today. 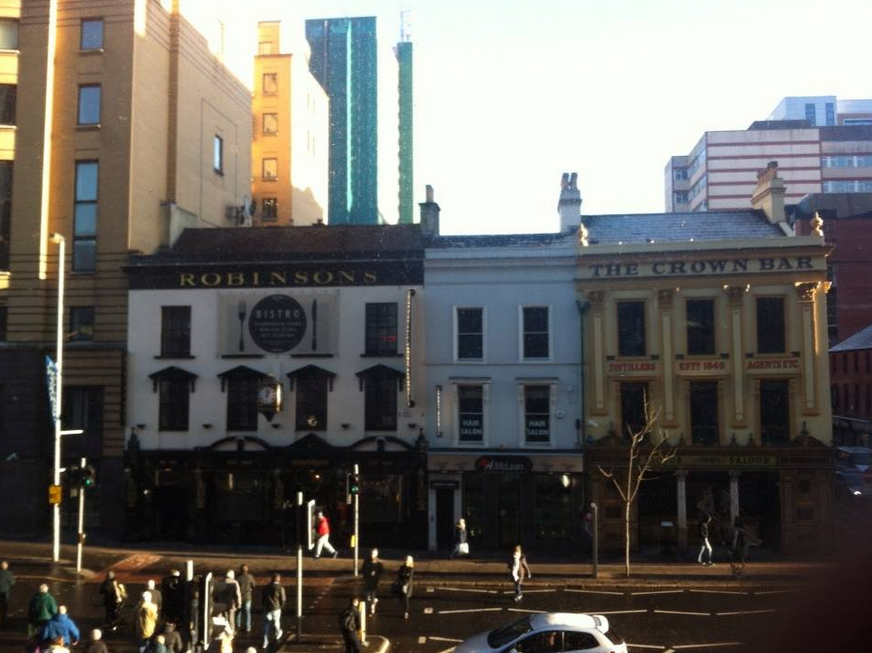 The day had not started well. There had been a very tight frost during the night and on my way out the door this morning to feed the hens I slipped on ice and fell on the broad of my back. I was looking at the bright blue sky before I had time to tense up and that was a good thing. I must have been shaken up still when I went into the henhouse for the damn rooster saw my defences were down and attacked me. The weight of him as he flies into you! I'm sure he'll make a delicious and hearty broth some of these days.

But it could have been worse. Poor Cousin Raymond was helping his daughter move house and he slipped on ice while he was carrying a washing machine. The washing machine fell on top of him. Apparently he is OK, still helping with the flit.

The doctor at the Royal Victoria Hospital told me that the infection in my left eye lingers on and I'll need to take another four week course of steroid drops. It seems it was a herpes infection and that I was lucky it was caught it at an early stage. Better news is that I am now on the waiting list for the cataract operation on my right eye and, in the meantime, I can continue to drive.

Glad to hear you are not hurt from the fall, and that the eye is better.
Chicken for dinner!

I'll give that rooster another chance but he better watch out in 2015. Happy New Year!