A Bit of a Scare

Friday was our annual day trip to Portrush and although it was tiring I think we all enjoyed the outing. It's a family tradition. The grandchildren take grandparents and Aunt Hannah to Barry's Amusements where they go on all the rides. This was our third year and we found that Miss Martha is an unrepentant thrill-seeker. In 2015 she did not disdain the teacup carousel, this year she was saddened that she is still not tall enough for the big dipper. She was just big enough for a very scary ride that practically turns a person upside down and which bears signs warning folk that the contents of their pockets will fall out. Poor Evie was far too small to go on it but at least she was standing handy when the pound coins started falling at her feet. An extra two quid to spend on sweets.

Hannah and I had a couple of gins and elderflower when we got home and a bit of good craic. I was just thinking what a good day it had been when Bert came in and told me that Rusty had had a "massive heart attack". I went out to see him convinced he'd be dead or dying before I got there. He wasn't but he did look a bit petered out and and was breathing really heavily.

Apparently they'd had the usual piggy row at supper-time and Rusty had been shoulder-charging Lily out of the way when he'd given a squeal and (so Bert said) leapt two feet into the air, then fell over on his side and started gurgling. Bert rolled him the right way up and he managed to get on the four trotters and stood there breathing noisily. I fetched him an orange (his favourite) and he ate it, then moved into his sleeping quarters. We left them to it and honestly, I thought he'd be dead in the morning.

It was the first thing I thought of when I woke at five a.m. and I went out to check. Both pigs were sleeping, breathing normally and I went to tell Bert. He said he'd been out at midnight and they were both settled.

Pigs are not early risers so it was after midday that we let them out. I thought they shouldn't go to their usual field as it's a bit of a walk. Instead I put them into a secure area behind the sheds. There's not much decent grass but there's is water, shelter and a pile of dung. They both had an orange. And fell asleep. 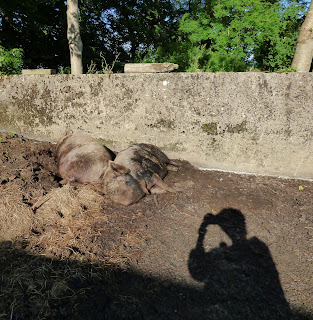 I checked on them later. It was such a lovely warm afternoon and they'd found a sweet spot on the edge of the dunghill. They are pigs after all.

He seems OK today. Ate more oranges. This evening Bert reported that they are back to fighting over food and that Rusty was shoulder-charging Lily again.

Yet I'm not sure that Rusty would have been capable of jumping two foot into the air. I wonder if Bert was exaggerating. He does have a tendency to make things seem worse than they are. Whatever came over Rusty on that evening he seems to have got over it and may live to fight another day.
Posted by Nelly at 11:40 pm

What a bit of excitement.