Happy Birthday and Thank You

Eleven days ago, on the third anniversary of Pearlie’s death I wrote a post where I left something hanging in the air…

I often used this blog to let off steam and there are lots of posts featuring Pearlie. Some of them were verging on harshness and someone once challenged me about that. And that is a story in itself and I will tell it... but not tonight.

The person who challenged me was my brother Eamon, when I was visited him in Vancouver in the summer of 2013. We talked such a lot during that time, very few subjects were left untouched. I remember him saying one evening,

I don’t like the way you write about Pearlie in your blog.

I was surprised to hear this from him but we discussed his feelings about it and I discussed mine. I believe we might have agreed to differ on the matter. But it got me thinking about this very different viewpoint from mine.

It had been such a great relief to spend time away from the home situation where every day was taken up with the needs of a frail, elderly woman and her constant stream of carers. I had time to think rather than to just react. And it was in Vancouver that I made the decision that we would give up the eight weeks of free respite care for Pearlie that we were allowed. Because she hated it, and knowing that she hated it, this respite break did Bert and I very little good.

When I got home I told her this,

Pearlie, Bert and I have decided that you’re not to go to Rylands any more.


We think you’re too old for it.


I’ll never forget the expression on her face. It was utter relief and happiness.

From then on everything got better. We only had another year and while things weren’t always perfect I I could be much more patient with Pearlie and as a result our relationship improved. My only regret is that I didn’t stop the respite care a lot sooner.

So tonight I’d like to thank Eamon for giving me the opportunity to take a good long break from home cares and then helping me to accept what needed to be done.

And, by the way, Happy Birthday Bro! 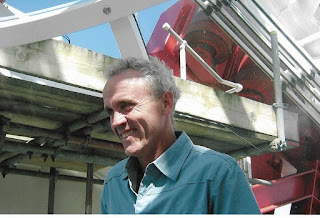 How wonderful to be able to do this and give all three of you a gift. Happy birthday brother.

Yea! I'll always be grateful for the brotherly kick that I needed.