Just because I live this idyllic life in rural County Antrim doesn't mean that I don't give consideration to what is going on in other parts of the world, or even in other parts of the British Isles. The first thing I do each and every day is check the BBC news site to see how World War III is coming along. North Korea's sabres are being well rattled and the Orange President continues to shake his tiny fists. That doesn't stop me pining for my Spotted Flycatchers who flew away from their nest on Thursday. Since then the weather hasn't been great and I really do hope they will survive.

I read Guardian Online most days and even buy the actual paper on Saturdays but today I can hardly bear to read it. Maybe when I'm feeling stronger. Instead I'm scanning photographs from 1990 and feeling quite amazed at how incredibly attractive Nellybert was back then. Why did no one tell us?

I did read that household income is falling at its fastest rate since 1976 and people's savings are at an all-time low. Perhaps I should crack open my own wee piggy bank before things get even worse. Brexit doesn't seem like it was such a good idea now, does it?

And I read this blog post, written by my sister who lives and works in London. It's to the point and chimes with my own feelings about that terrible disaster at Grenfell Tower. 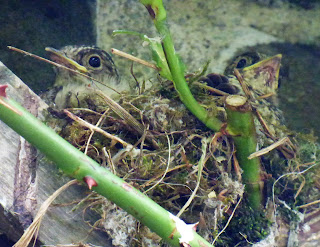