So, I ended up inventing this really great cocktail and it was a total accident. Dawn sent over some delicious raspberry cake and two portions of sorbet made with her and Les' very own raspberries. The cake was delectable and I scarfed down my portion of sorbet. Bert forgot his.

You didn't eat your sorbet and it's melted.


I sort of did but it was melted. So I tossed it into the gin and tonic I'd just poured. OMG! It was delicious and there I was sitting there in my own Secret, Private Sitting Room but it felt like I was in a Cocktail Bar, the sort you never want to leave.

I tried to recreate it today. First off, into the wild place where the white currants grow and where Les abandoned the raspberry canes that were offshoots from the ones that grew in Dawn's house in the days before they knew each other, before they got married, lived happily ever after etc. etc. only pausing to bake and make delicious food (Dawn) and teach Bert how to play Gypsy Jazz and me how to grow garlic and bake sourdough bread (Les). I picked white currants and battled the nettles to pick Les & Dawn raspberries which, truth be told, are far more delicious than our own ordered rows.

Marty (not Banjo, the Social Worker one) turned up and we picked the ordered canes until the rain came - discussing life and politics as we went. He wanted to do Raspberry Vodka but his wife said Jam so there you go. Later on that evening I gave most of my pick to an Electronics Engineer called Bhrian (there's a fada in there somewhere but I can't hack that at the moment), apparently his five children love raspberries nearly as much as he does.

Anyways, I prepared white currants while watching iPlayer, some police procedure drama - that over I tried to recreate my sorbet based cocktail and think I succeeded when I made a slightly sweetened raspberry cordial. Five sheets to the wind, police procedure over I watched Frankie Boyle's New World Order and found myself nodding in delighted agreement to almost everything that the panel discussed. And I'm thinking that the BBC may still be worth the licence fee. Not sure whether that was due to Frankie Boyle or my Accidental Cocktail which I might call New World Order. 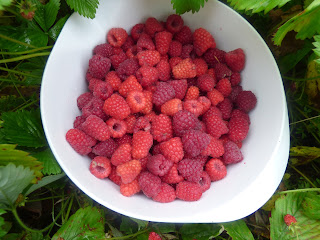