A Garden from a Hundred Packets of Seed 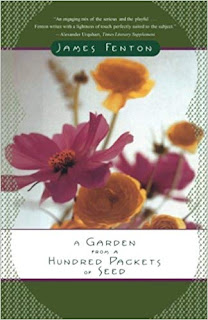 One of the more wonderful things about the internet is how easy it is to source hard to find books. The poet James Fenton's A Garden from a Hundred Packets of Seed was not available from my local library nor was it to be found on Amazon but, as always, eBay obliged. I couldn't wait to get it.

The premise was interesting. A hundred packets of seed. It would have to be a very big garden if all those seeds sprouted. It would cost at least £300 to buy the seed and a fair bit of compost and seed trays would be needed as well. Still, it would be much, much cheaper than the garden centre, that is if one could even find that sort of variety in a garden centre. I'm sure Fenton doesn't expect anyone to actually sow 100 packets in one season or even two. Growing space might be a problem too.

The book arrived and I read it in one sitting. It wasn't easy. The print was small and too many of the pages were coloured orange or violet which made it difficult to read. There were no illustrations. Despite all this, it was an inspiring read and I longed to grow new things.

I spent an hour copying out a list of Fenton's recommendations. Black ink on a white background - super-easy to read. Would it be wrong of me to reproduce the list here? Would it be an infringement of copyright? The book is still worth it for the way Fenton writes. He is a poet after all.

But I did do this thing and it has taken me three days. I could have completed it in an hour if I'd put my mind to it but I have this fantasy that my life is composed of a series of Herculean tasks so I preferred to take my time. The thing I did was make a gallery on Flickr, a gallery composed of the hundred plants that Fenton listed. Many of them were unfamiliar to me which was rather a thrill. Those will be the ones I shall try and the gallery will assist with the choice.

In case readers are unfamiliar with the concept of Flickr galleries they are selected from other people's pictures, not one's own. I'd like to express gratitude to all my fellow Flickrites who allowed their beautiful photographs to be used.

Here is the link. I'm sure that anyone who has a look will be impressed with the gorgeous photographs and James Fenton's choices. Enjoy!

And if any of the seeds packets I decide to purchase and sow succeed be sure I will keep everyone posted!

Thank you, Dermot. I shan't sow them all. And there are about ten per cent I already have.

Thanks for this post, I must get that book. His choice of plants is perfect. I've a few of these flowers but not nearly enough.

Imagine the wonderful and colorful garden with those things in it. One pretty flower is labeled Black Eyed Susan. I don't think it is one. Here's a link to Google pictures....

And much to my surprise, I actually knew many of those beautiful flowers. I hope you plant some of them.

Do get the book Claire. If possible, avoid the version with coloured pages.

Mage, its a labelling thing. Thunbergia alata also goes by the name Black-Eyed Susan. But I'll double check to make certain I have the one that Fenton recommended.

I try to comment yesterday! Just to say beautiful flowers.