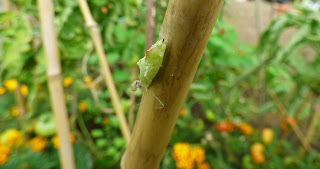 Chrysalis on tomato support frame in the polytunnel

Bert went a-wooding on Saturday to begin dealing with the big beech tree that blew down in the sheugh on the day of the strong wind. I mooched around the house doing a bit of this, a bit of that. It was a fine bright day. After a while, I went to see how he was getting along and found him loading all the fiddly branches in a big pile. And while he was doing that, he couldn't chainsaw. The truth is I worry about him when he's off a-wooding, just like Matty used to worry about Daddy. What if he injures himself, out in the fields, all alone? Lying there, bleeding out, his phone (as usual) lying on the coffee table, not able to get help. I may seem happy-go-lucky but I do get rather carried away with worst case scenarios.

Anyways, he was fine. I looked at what he was doing and thought, I could do that and let him get on with the chainsawing and, at the same time, keep an eye on him, be there if he accidentally cuts his leg off, be able to run out to the road and flag a vehicle down as my phone (as usual) is lying on the sideboard and I wonder which of my garments would be best to tear up to use as a tourniquet if the worst did happen. I'm thinking all this as I'm throwing small branches on the huge pile and keeping a look-out for any breach of health and safety procedures on Bert's part.

Of course, tourniquets are no longer recommended and stanching and applying pressure to large wounds is the thing to do nowadays, The tee shirt I'm wearing would be good for that purpose. But would Bert be able to apply the pressure himself while I ran out to the road looking for help dressed only in a flesh coloured bra and Gap jeans? That would certainly stop the traffic.

Happily, none of this came to pass and we spent a couple of hours a-wooding and I have to say, it was one of the nicest Saturdays I've ever spent and I could hardly wait to get back to it but it would have to wait until Monday as unnecessary outside work on a Sunday is still frowned upon in this God-fearing townland.

Sunday was a good day too. Bert visited his Aunt Lizzie and I worked in the polytunnel and made pastry and a pie filling for the next day's dinner. And the reason for that was so I would have more time to go a-wooding on Monday.

Bert was a bit of a slow starter on Monday morning but eventually, he gathered up tractor, trailer, loppers and chainsaw and set off. I had a steamed chocolate pudding on the hob and it needed more time so he set off before me. Twenty minutes later I joined him to find that he'd already got several decent-sized trimmed branches on the trailer. I chided him for working too hard then set to gathering the trimmings to load onto the enormous pile. Bert stops work, starts staring at the fallen tree. He is pondering his next cut. I stop working too and ponder alongside him. I haven't a clue what he should do. All I know is that I will not approve him perching anywhere precarious whilst operating the chainsaw. He decides to approach the job from the other side of the sheugh (ditch). It is a very deep sheugh and it involves him climbing down then clambering up the other side and over the thickest part of the tree trunk. In fact, it is such an awkward manoeuvre that we decide I should climb into the sheugh and reach the chainsaw up to him. It was at this point that I realised that one of my wellington boots was letting in water.

Safely on the other side of the ditch, Bert starts to chainsaw while I watch from a distance. There is an expectation that the tree will drop closer to the ground so it is best to stay back. It takes a while. The tree moves a bit but not far enough. He can't see what is holding it up. If it was winter and the foliage gone it would be possible to work it out but not with the tree in full leaf. I keep watching to make sure he stays safe. He leans over a small branch to steady himself as he starts to cut into a thicker branch under it.

I say as I've said so many times already. Then he stops, he goes pale, the chainsaw stops. I can see he has hurt himself. He's popped a rib. Game over, no more wooding for us. And now the bloody tree is a health and safety risk for we still don't know what's propping it up. It will have to be Clint and the digger now. How he will gloat at having to finish the job for us.

I advised Bert to rest while I went to Killyless Stores to buy new wellies. When I got back he said he was feeling much better and thought he might finish trimming back the rhododendron bushes beside the greenhouse. I pulled on my new boots (so comfy) and went out to help and was just in time to see him take two-thirds of a lilac bush down.

It'll do it no harm,

Says he. We worked at the hedge for about an hour and, since the chainsaw was running anyway and Zoe had arrived, we persuaded him to saw down one of the three peach trees in the polytunnel. It was growing in a really awkward place and hadn't produced fruit in two years. My hopes are, that the one beside it will do better if it's gone. And, if not, it's going too. The third one we'll definitely keep as it produces a good crop most years and is well worth the space it takes up.

Poor Bert. He'd hurt his rib, banjaxed the fallen beech and been forced to murder his carefully espaliered peach tree and his troubles were not yet over. For Miss Evie, six going on seven, playing her favourite game of standing on his steel-capped boots while he walked her around, gave him a shove backwards which knocked him completely off balance and they both went tumbling to the ground. She, thankfully, was completely unhurt but he staved the palm of his hand and gave his frame another jolt.

The white hen refuses to lay in the hen-house. This is her latest nest. She thinks she can't be seen.

When he woke up this morning his hand was black and his rib was throbbing. I said,

Should I have a chat with Evie and say maybe she should be less rough in her play as she could hurt you?

Don't bother. She'll hardly be doing it for much longer. 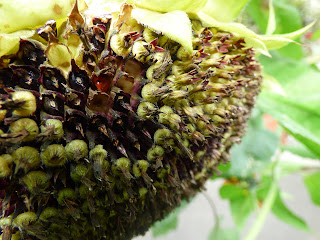 Evie was delighted with this ladybird's hiding place.

That Evie one has form. She sent Jean flying at the bus stop in Muswell Hill. Hope Bert feels better soon.

Hallion is the word that springs to mind.