How hard must it be to find someone selling this shrub for less than £30?

I first bought it in a 2litre pot at Ballymena Market. back when it stood on the original Fair Hill site, planted it at our first home on the Dreen Road where it flourished. 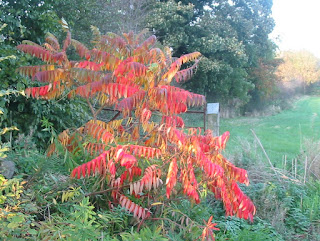 We sold that house to Clint and we knew he wasn't a lover of flowers. He was going to dig everything out! And he did. But, before that happened I returned to the garden, dug out suckers and potted them on. It took a while, a long while before we organised our new garden and decided where the Stag's Horn Sumach should go.

Too long. The Rhus Typhina was potted (and doing very well) in 3litre pots but, by the time I went looking for them, were gone. Nowhere to be found. Completely disappeared. Bear in mind that they were six or seven plants, among several thousand. It was a plant nursery after all, and my sumachs were lumped in along with the rest of the For Sale plants and some utter low-life landscaper type bod had arrived up someday, on a day that we weren't around and stole them. This light-fingered shit probably took other stuff as well but we don't keep track of lonicera, clematis and random shrubs so who knows.

That was years ago and I still haven't replaced my furry-branched sumach. There have been other sumachs but not Rhus Typhina. I'm old now, how many years have I got to appreciate those velvet branches and the unsurpassed Autumn colour. I could spend thirty quid being robbed by some pack of English bastards, charging me stupid postage and a further six quid surcharge for being from Northern Ireland, Channel Islands or The Fucking Hebrides like having to get on a boat means we get to be robbed. When I KNOW there are people within a ten-mile radius with Stag's Horn Sumach TORMENTING them with suckers and all you'd have to do is let me dig them up and I'll swap you a clematis, or some crocosmia Lucifer and as many aquilegias as you can carry.

What's brought this on, you might ask? Bert and I, this very day sailed to Dobbie's Nursery in Lisburn, which emporium offered Rhus Typhina on its website. I knew it was a Fool's Errand, websites being notoriously unreliable entities. And of course, I was right. I got into a conversation with one of the (Greenmount educated) sales assistants. It was an interesting and enlightening conversation. Apparently, crocosmia Lucifer is still a thing and also, the website is a nonsense. All that it means is that Dobbies knows Rhus Typhina is a plant, they've heard about it and might have sold it once, several years ago. What else can I say about Dobbies? It is very expensive. Araucaria that Bert sells for ten quid they sell for forty. There is a butchery? There is. I find that strange. The women's toilets are weird. The toilet cubicles are flimsy and cheap looking. The wash hand basins are shaped like flowers. They look stupid and hard to clean. I did not think of flowers, just bacteria.

Despite all this, I bought stuff. Strange stuff. Unusually coloured crocus, weird bean seeds and nasturtium seeds that are supposed to look like orchids. Dobbies has a chance to redeem itself. If these corms and seeds fulfil their promise I might return.

Good heavens! 30 quid! We had a beautiful stand of them at the end of our property when I was a kid. Later in Boston, there was a gorgeous stand of them on Rocco's daily walk through Olmstead Park in Jamaica Plain. I hope you find some kind soul whose back meadow is being overrun with the things will give you some suckers.

evilganome - a kind soul has revealed himself.

I too hope you find suckers somewhere in the neighborhood.

Working on it Mage and will keep you posted.