We spent some time yesterday digging out astilbe and Johnson's Blue geraniums because they had got far too big for their space. The astilbe will be going to Richard of the enormous garden and the geranium to anyone who wants it. We left a bit of that because it's a big favourite with pollinators.

And speaking of pollination, our friend Rachael was on the TV again. Not rare orchids this time but because her organisation Polli:Nation (part of Learning Through Landscapes) scooped a National Lottery Award for Environmental projects. Well done to everyone. I've learned a lot from Rachael, especially about encouraging pollinators by letting parts of (actually a lot of) our outdoor space run wild.

After the grubbing out, I planted oriental poppies. I know, I know! Not a huge draw for pollinators but I love them so. I'm not even sure they'll do, as the part of the garden they went into is rather heavy going.

Bert went to the doctor this morning for a discussion about how to manage his bone condition. He has been diagnosed with osteoporosis which is unusual for a male not yet sixty. He's a bit blue about it all. I felt a tad guilty about wanting him to rotovate especially as his rib is still bothering him so we decided to leave that until he's feeling better and planted the Stag's Horn Sumach anyway. He said we can work around it. 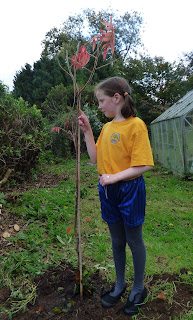 That little tree will branch out and become much fuller next year. And the year after that it will be even better. I'm looking forward to watching it grow.

I wish you could send me some of the blue geranium. Instead, I will watch your tree grow. :)

I wish I could too Mage but it's probably against the law!