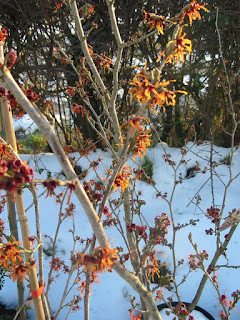 I set the alarm last night for 5:15am as I wanted to see the Super Blood Wolf Moon. The name alone was fantastic. I said to Bert,

No doubt, as per usual, there will be clouds and we'll see nothing. If it's good do you want me to wake you?

Only if it's amazing.

I went to bed, read from three books,

Then turned out the light and tried to sleep which wasn't easy as my feet were FREEZING.

Jess wakened me sometime around three or four, whining, wanting to go downstairs. I looked out the window and saw it was misty outside. It turned out the dog was thirsty and as she lapped from her bowl I went outside. Despite the fog, the moon was visible and was mostly eclipsed.  Perhaps two-thirds. I returned to bed and slept almost immediately. Two hours later the alarm went off. Totality! I hurried downstairs. The fog had thickened and there was no moon to be seen. Back to bed with a cup of coffee and some more A Monster Calls then back to sleep until nine o'clock.

When I eventually got up I wondered if seeing the partially eclipsed moon had just been a lovely dream.
Posted by Nelly at 12:18 am

We saw it when it just rose above the mountains. Later it was hidden by fog, darn it.