We Go To Belfast

Jazzer and I went to Belfast yesterday for a bit of a day out. First of all, we went to Matchetts to purchase a few clarinet supplies for Bert. But we went into the wrong Matchetts. We entered the shop that sold guitars, keyboards and drumkits and where the assistants had long greasy hair, jeans that were falling off their bums and an air of debauchery. I expect they all play in thrash metal bands. They sent us to the right shop. This one sold all the other instruments. Here the assistants had neat short hair, a slightly patronising air and I'd say they probably played with the Ulster Orchestra. They didn't have the actual thing that Bert wanted most - a new mouthpiece for his clarinet. Nor did they have the pads he needed. All I was able to buy from them were a few packets of reeds and a stick of grease. No wonder Amazon is taking over the world.

There were further disappointments in store. I'd never been to a Frankie and Benny's before and I intend never to darken their door again. I ordered spaghetti and meatballs and it was dire. Couldn't finish it, flavourless and could barely cut the meatballs in half they were so tough. I think the chef must have bound the meat together with a good-sized pinch of Blue Circle cement. I was even more convinced of that this morning at my ablutions. The last time I offloaded one like that I'd drank about a quarter bottle of kaolin and morphine. 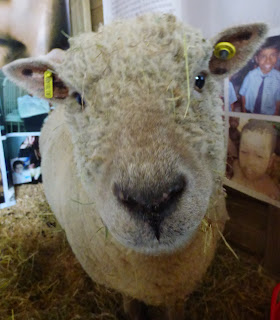 We had a bit of a wander around the streets adjacent to Royal Avenue and came upon a live Nativity Scene featuring two shepherds, two donkeys, a goat called Tinsel and a pregnant Suffolk ewe called Holly. All the animals seemed very content in clean, comfortable stalls and were eating their heads off. Oh! Forgot to mention - there was a plastic Baby Jesus but no sign of Joseph and Mary. They'd probably slipped over to Kelly's Cellars for a pint. I'd say that meeting Holly the sheep was one of the highlights of my day. That and the sale at Seasalt Cornwall.
Posted by Nelly at 8:35 pm

Holly isn’t a Suffolk, they have black faces and legs, she is more like a charollais cross breed but she is lovely!

That's what the man told me and I meant to check it out on Google but the Glens woman got there first! She was a lovely ewe,