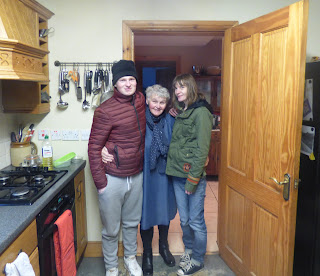 See that doorway? That doorway is closed off now. It will be plastered over as if it had never been and the plan is some new kitchen units, maybe a new cooker will stand where it used to be. Closing off the doorway is the first step of the project. Bert took a picture of Ben, Hannah and myself standing there to commemorate it.

Lordy, I look like a real wee grandma in that picture. Bert said I'm like a Dorset Horn ewe looking out of a hedge. He really does pay such delightful compliments.

So, how are we going to get out of the room with no door? No problem. He opened up another door. Our kitchen was originally two rooms so there were two doors opening into the hallway. But it was a shame that we had to lose the doorway bookcase. 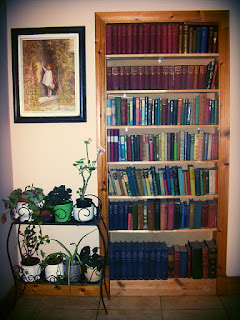 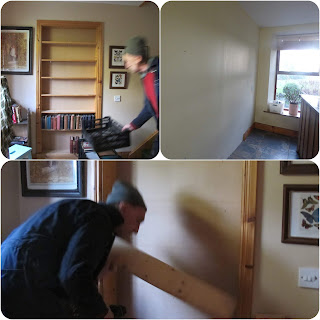 I thought it would be weird getting used to the new layout but it's not. The dogs are a little puzzled by it all, especially Ziggy. The cats are unperturbed. They act like it's always been this way. I expect Martha and Evie will be a little bit sad that they won't have the roller-skating scope they were accustomed to.

And I'll have to get my thinking cap on and decide what sort of new kitchen I want. I'm almost looking forward to it.
Posted by Nelly at 11:24 pm

You are going to have such fun designing the new kitchen.