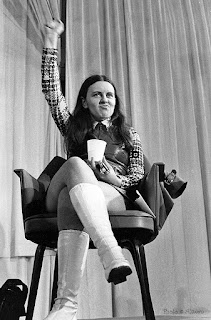 It's fifty years today since Bernadette Devlin was elected to parliament as the member for Mid Ulster. She was 21 years old. I was a few years younger than that, too young to vote but still very keen on politics. I remember her as one of the few who could give Ian Paisley a bloody good argument in the TV political discussion programmes at that time. How we cheered her in our house. For Paisley was a verbal bully and our Bernadette was well able for him.

When she was elected to Westminster the Daily Mirror had her on the front page. I don't remember the headline but it was patronising, concentrating on her gender, youth and fashion sense. She was photographed on a playground swing as if she was a little girl. I was very cross about this. Hardly a mention of her fierce socialist politics, instead comments on the length of her skirt. But it was 1969! Everyone wore short skirts then, even Elizabeth Windsor.

I tried to find the photograph on the internet using the keywords  'Bernadette Devlin Daily Mirror Swing'. No luck. Except for the news item about her taking a 'swing' at the Home Secretary, Reginald Maudling on the day following Bloody Sunday.
Posted by Nelly at 11:48 pm