The weekend plan worked out well except Saturday turned out to be a very fine day so tiling was abandoned in favour of gardening.

We started a new flowerbed and most of the plants in the picture were planted, mostly verbascum and aquilegias. The rest of those pots were cleaned up and mulched. They are pines that Zoe grew from seed, a fig and some lilies. On Sunday Bert started the tiling and I tidied the garden. 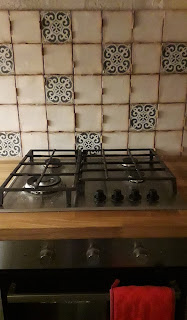 That's a work in progress.

Today was another fine day. Bert spent the morning on the tiling and I helped with the cuts by spraying water while he used an angle grinder. He forgot to tell me to be careful of flying dust and tonight I have a sore eye. Tomorrow he will be purchasing a tile cutter to finish the job.

I spent the afternoon making dinner and having little chat with the girls. Martha and I were looking at pictures on Flickr and she noted that I get a lot likes from 'Jean' and 'Ganching'.


I told her about blogs and blogging and that Ganching and I have been writing blogs since before she was born.

It might be fun to see what I wrote when you were born.

We found this from the day of her birth,

Today was always going to be a busy day. We'd planned to go visit, with a view to procuring, Kune Kune pigs. Later we'd be going to the Wee Manny's for a surprise birthday party.
What I didn't expect was hearing from Dave that Zoe has been safely delivered of a daughter, our first grandchild. She was a week earlier than expected - the impatient little thing!
So now I must go and wash the smell of pig from my person and get myself ready to visit Zoe, Dave and daughter.

And a few days later,

How fascinating this little human being is! And really, all she does is nurse and poo and burp and pull the most peculiar faces. I'm told she cries but, so far, never in my presence.
She is, of course, far more beautiful than the normal run of babies. She is, which goes without saying, already displaying signs of superior intelligence. And, for a creature barely a week old, she is amazingly strong and active and alert.
Am I besotted? I think I must be.

But I had an oven to attend to and salads to make and Martha wanted to read more. About ten minutes later she was able to inform me that I'd written hardly anything when her sister was born and that Evie was almost a year old before she featured in Nelly's Garden. Sibling rivalry. I told Martha that Flickr was where I'd put all my Evie pics. I hope I wasn't telling a lie.
Posted by Nelly at 11:31 pm

I just hope that she doesn't remember you said that. You are a great gramma, and those tiles are lovely.

Thanks, Mage. We had some lovely gardening weather last week and the tiling was postponed. This past couple of days has been cold and Bert has returned to the task. Hopefully, to finish this week.