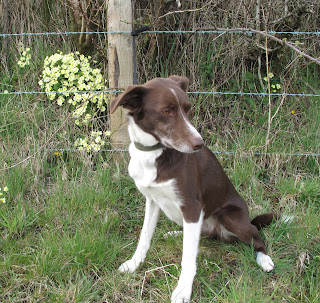 About a month ago Bert noticed Judy wincing when she jumped on to beds. We both put it down to a minor injury which was wishful thinking. She was also hesitant getting into the van and on walks, she was far more sedate. So five days ago we took her to the vet.

Judy has had little experience in the vet’s office. At first, she was so pleased – new lovely girls to schmooze with! But then - we left her! And those lovely girls stuck a sharp needle in her leg and she woke up in a pen, feeling groggy and all alone.

While she was sedated she had two X-rays and it turns out that she has moderate arthritis in one hip joint and mild in the other. She isn't even eight years old but the vet said that once a dog is over seven it is considered to be elderly.

So, she's on some kind of medication trial and goes back to the vet's office on Friday. Supposed to be taking it easy and she certainly has. She has had lots of extra attention and petting and the meds do seem to be helping her.

Zoe said we should think of giving her herbal medications too. There is a Dorwest pill, Garlic & Fenugreek Tablets For Dogs And Cats that our old dog Danny took and that seemed to do him a lot of good. He was still going strong in his seventeenth year when he died in a road traffic accident.*


Judy is a very loveable dog and there have been lots of inquiries regarding her wellbeing. Our friend Richard called the other day and told us of a very efficacious treatment that his brother had procured from Pets at Home for his ancient labrador. It seems the old dog is doing so well on it that our friend’s father has decided to start taking it too. The results have been very good and the old fellow has been rising every morning feeling as lithe as a sixteen-year-old. I wasn’t able to ascertain the name of this wonder drug but we have decided we will wait until our human guinea pig has been on the pills for at least two months before we follow his lead. Unless, as Richard says, his father starts running around the yard barking at birds in which case we might hesitate.

* Bert ran over Danny. We sometimes wonder if the old codger committed suicide. He was nearly blind and very deaf and the only eye-witness (Pearlie) said his death was immediate.
Posted by Nelly at 10:41 pm