Today was one of those days that reminds one of how sad life can be. We went to the funeral of a man in his early fifties who had died from a brain tumour. I didn't know him well but I knew other members of his family, his older sister in particular. This man had spent his entire working life in a local tobacco factory which, up until recently was one of the most important employers in the local area. Between 2014 and 2017 everyone who worked there was made redundant. Many of those attending the funeral today were ex-workmates of Hugh. No problem getting time off for a weekday funeral - they all had time on their hands.

I went for a quick walk in the early evening. Now that the days are lengthening it is possible to do that and I'm grateful for it. Ziggy and I weren't even five minutes from the yard when I spotted a thrush lying at the side of the road. I thought it was dead but when I looked it was still moving. I picked it up and returned to the house and left it in the greenhouse. I expected it to be dead when I got back. Ziggy and I walked for thirty minutes and when we got back the bird was still alive. I made it as comfortable as I could and left it. Thirty minutes later Bert returned from visiting his aunt. He looked in on the thrush and said it was getting very cold. Fifteen minutes later it was dead, I was racked with guilt. should I have interfered? Should I have hastened its end? And if so, how? I wouldn't have the courage to do anything violent for fear of increasing its suffering. After it died I felt its little body and it seemed to have a chest injury. No doubt a blow from a car, one of those bastard cars that drives far too fast on our B-road.

Peter called round after work and he told me that a friend of his says that the best way to hasten a small suffering animal's end is to wrap it in kitchen roll and place it in a freezer. I don't know. That wee thrush took a long time to die. 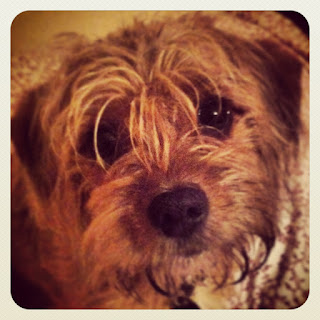 Ziggy, my companion on today's walk. His little face reminds me that life is not always hard to bear.