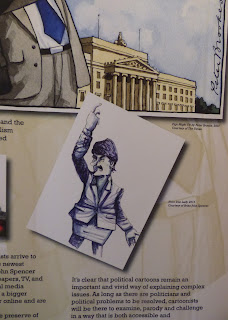 In the many years I’ve known Swisser we have never gone shopping. It’s a very girly thing to do, don’t you think? That changed yesterday. Of course, being people of intellectual leanings, for I have two (mediocre) degrees and she is a professor, we couldn’t hit the shops before we had taken in an interesting exhibition of political cartoons in the Linenhall Library. 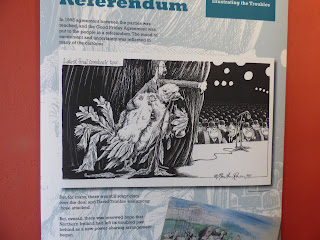 Nor could we begin sales-hunting until we had been for lunch at the John Hewitt. That was my first visit to this well-known pub and I really liked it. The food was delicious and the ambience most relaxed.


After lulling me into a sense of false security in Marks & Spencers, Swisser led me into a succession of shops, some of which I had never entered previously. In fact, I’d thought that old people might not even be allowed. But it turns out that even the trendiest of shops are only too delighted to welcome anyone in possession of money. My favourites were Zara and Urban Outfitters. I also discovered that I am an excellent stylist as all of the items that Swisser purchased were found and recommended by me. Despite dressing like a particularly dowdy farmer’s wife I am actually a fashionista at heart. Really, I am, I just don’t choose to wear it. Right, this minute I am rocking a purple Regatta fleece and Primark pyjama bottoms. This may not tick any fashion boxes but I am very happy and comfortable. And warm.


I bought a long-sleeved burnt orange thermal vest in Marks and Spencers and an oversized plum tartan shirt in Urban Outfitters. I won’t wear them together. Although I might if I feel like it. My choices for Swisser were,

Shift dress from The White House.
Vintage short navy jacket from Urban Outfitters. I advised a change of buttons but Swisser likes the originals.
Plum colored top from Zara.

All garments cost less than £50 in total.


Later that evening I heard that Swisser has very strong opinions about fleeces as they pollute the oceans.  This is worrying as I own three fleeces and several fleece blankets. She said that it is OK if they are never laundered which is one of the things I liked about them - ease of washing and drying. She still has one but never washes it but worries if she wears it in the rain. Sometimes I wish Swisser wouldn't tell me these things.
Posted by Nelly at 9:12 pm