Today I met up  with Grannymar for a coffee and a stroll around the Castle Grounds in Antrim. It's been six years since we had a real life meeting and there's been a lot of water under the bridge since then but my fellow blogger hadn't changed a bit. One of the very many great things about blogfriends is that many years can go by but you still pick up just where you left off. 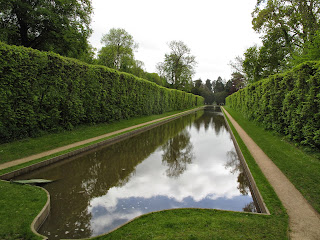 On the way home I called with two of Matty's oldest friends, sisters-in-law who live next door to each other. Both are doing great and that was good to see. I also got to meet one of the sweetest and most lovable toddlers I've come across in a long time.

I got home later than I expected to find Bert in a fainting condition, weak from hunger and wondering had I brought home anything to eat. He always asks this whenever I've been out for more than an hour. There are two things he has yet to absorb and they are firstly, when I go out to meet people socially food shopping never enters my head and secondly, there is always lots of food in the house. He never asked me a single question about my day just lamented that all he'd had to eat since breakfast was an egg and a slice of wheaten bread. There was no other food in the house.

Of course he was wrong about this. There were the usual staples, bread, beans, tinned fish, home made rhubarb tart, cauliflower cheese etc. I took him by the hand and pointed at the big door under the fridge.

See this Bert. It's not just a big box to hold the fridge up. If you open the door and pull these drawers out there are all sorts of things in there.

I would never think of looking in there.


He got quite excited about some fish fingers and a bag of frozen peas so I left him to it. Then he was off out to his music night and left me to dine on my own which was fine as I'd eaten at Anna's just before I got home. Another reason why food shopping wasn't on my mind.

But before I thought of food I started a rhubarb wine and bottled a damson and blackcurrant. It was when I was pulling frozen rhubarb out of the big chest freezer that I noticed a few boxes of dinnerish stuff and pulled one out at random with no notion of what it might be. Whatever it was I reckoned it might go well with pasta. So that was my dinner, A bit of pasta languishing in the store cupboard, lying in an almost empty packet, the dubious thing from the depths of the freezer and the dregs at the bottom of the damson and blackcurrant wine flagon. It turned out to be chicken and mushrooms in tomato sauce and it wasn't bad at all. And I got to feel virtuous by 'using things up'. Bert would rather have died of hunger than eat it. I wonder if that is why he is thin and I am not.
Posted by Nelly at 11:36 pm

Yesterday was special and it was wonderful to catch-up and continue our conversation! Like Bert, I too eat fish & chips from my freezer alas the fish was not as fancy as his, mine had no fingers!! ;)

So wonderful to meet with online friends. And too, would he notice a big sign that said eat something from the freezer? I love the table photos in the last entry. Wonderful stuff. LOL

Was a great wee afternoon Marie.

Marie & Mage - I completed my first craft project tonight, framing a picture, since I got my eye fixed. Must be two years or more since I did anything like that and it felt great. Bert will still be hanging it as I have never mastered putting nails into walls without knocking chunks of plaster out.

I love being able to
see properly again.

So good to read that you are doing well with the new eye and crafting!