The alarm this morning was set for 05:30. It was tough getting up especially as I'd been wakeful during the night. I showered, dressed, breakfasted and called Bert at 06:30. He appeared downstairs in a pair of Crocs, red tartan pyjama trousers and an ill-matching green check pyjama shirt. To say he looked odd would be an understatement. The 5 minute drive to the train station was not without event. As usual Bert left fastening his seat belt until he was actually driving and, as he did so, he almost caused an accident by swerving towards the middle of the road just as another vehicle was overtaking. This is why I was taking the train instead of having Bert drive me. He is not at his best first thing in the morning. What would I have done if he had been in an accident? I would have had to get out and hitch a lift with someone going into the village. Then the thought of Bert standing by the side of our road in that crazy outfit while all our early bird neighbours drove past rubber necking the scene made me laugh and I recovered my humour. It would have been the talk of the village before the clock struck ten. Ernie would be one of the first to hear. The lads in the garage would spread the news widely. Perhaps it would have taught Bert to fasten his seat belt before driving off.

The train journey went smoothly (lots of yawning fellow passengers) and I got to the hospital fifteen minutes before my appointment time. The nurse who was first to see me tsked when I gave her the letters from Eye Casualty. “He'll not take you” she said, meaning the surgeon. I was crest fallen. This was my fear, the worry that had kept me so wakeful the previous night. She told me to wait until she had the chance to speak with him. Five minutes later the great man entered. My nurse consulted with him. Five minutes later she was back at my side announcing, “He's going to take you! Come on. He says that eye has been clear since March!” I was delighted and rather pleased that I had kept attending Eye Casualty so that all the relevant notes were there.

Now to the actual cataract removal. A friend told me that it would be twenty minutes of discomfort but well worth it. Yet I didn't find it uncomfortable, just very, very odd. The people who carried out the procedure were lovely and the great man turned out to be pleasant and easy to talk to. He oversaw the procedure which was carried out by another. The colours and shapes that I saw as my eye was being worked over were strange and beautiful. It seemed to take a long time to prise the cataract away. (I was told afterwards that it was very dense.) I was listening to the conversation between the surgeon and the nurse as he requested instruments and I could not help giggling when he asked for “the chopper”.

When all was done I was informed that it had gone very well and then I was wheeled off for coffee and biscuits and a chat with a nurse on aftercare. Bert and one of our friends picked me up and we went back to his house for lunch.

Home again, home again jiggety-jig to find most of the family already there.. Martha and Evie were very taken with my eye-dressing. Martha said I looked like a pirate. I was spoiled by everyone and now, as soon as I've posted this I'm off for a lie-down. The eye dressing doesn't come off until tomorrow and I'm excited to see what I can see. 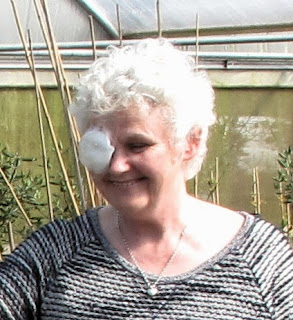 glad it is all over, I was thinking of you today.

Very glad to hear it went well. Hope all is crystal clear tomorrow.

Thank you everyone. I'm still a little anxious about taking off the dressing but I'm sure it will be fine. My eye feels as if someone has punched me. Not that I'd know what that feels like but I can imagine.

So glad that all went well.

Eye pad off and my vision is still very blurred. Apparently it can take a few days for things to 'settle'.

This is wonderful stuff. I'll be here looking forward to the settling.