From The Sallagh Braes to Lough Neagh

Warning: While this post does not contain Game of Thrones spoilers it does show some gorgeous pictures of the Northern Irish countryside. 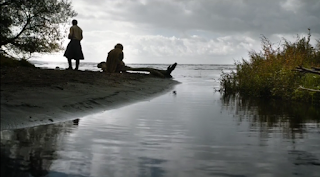 One of Game of Thrones' many pleasures is spotting the location. A few episodes ago we had Petyr Baelish and Sansa Stark standing on the Sallagh Braes looking down at a computer-generated Winterfell. Tonight we had Fair Head and what I believe was the shore of Lough Neagh. I know that some of the location work was filmed in Antrim as a cousin of mine just happened to be cycling by as the actors were taking a break. If one is a fan, as I am, it is also fun to chat to various folk we know who have worked as extras on the show. We were hoping to see Martha and Evie's Daddy tonight but there were no wildlings to be seen anywhere. 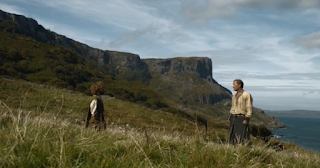 A friend told us this story. One of the people working on the show approached his brother asking if he knew any folk with with horse riding experience who might come on the show as extras. Our friend's brother rides with the local hunt and at that time he was sporting longish dark hair and a heavy beard.

So what did he say?

Said he didn't know anyone.


Martha and Evie's Daddy said that extra work is long and tiresome and that often, when scenes run over, there is hardly enough time to eat. He had a day working as crew and said that was much better, with tastier food and more breaks.

Another friend told us that way back at the start when Khal Drogo and Daenerys had their first very sensual love scene that the tent of romance was pitched in a cattle shed in Buckna. I'm glad I didn't know that at the time for it would have ruined the vibe.

Ah well. Maybe we'll get to see Martha and Evie's Daddy be a wildling next week.
Posted by Nelly at 11:09 pm

Yes i was sure this was lough neagh, i have many a photo very similar to the one above. The exact same colours!

We have just become hooked.

Naoise, it's not widely appreciated but the Lough is very beautiful.

Mage, you are in for a treat.

I don't watch TV so I know nothing of Thrones, but the countryside is beautiful.

It is lovely in parts.