An Update On My Little Life

The first thing is these damn eyes of mine. Way back in January I got a date for the cataract procedure, for the 19th February and I was most delighted. Then that procedure was postponed and I started to think I had been forgotten about. Meanwhile the eye infection kept recurring and eventually I couldn't use steroid eye drops any more. Now I've got a new date for the procedure - next Monday, seven days hence. And the eyes are still bothering me. The condition has been diagnosed as adenoviral keratitis and it is affecting both eyes. So I'm off to Eye Casualty tomorrow with a letter from my GP. Catching the 07:22 from Cullybackey so hopefully I won't be at the hospital for the entire day. I expect to hear if I'll be able to go ahead with the procedure next week and, of course, I shall keep you all (all several of you) updated.

The second matter is Roy, the fat old collie we inherited. He's not been mentioned for a while. Happily he has fitted in with us far better than we ever hoped. He loves most people, though not that keen on the ones under three foot because they squeal a lot and he doesn't like CBeebies too much. When the small folk are around he hangs out in other rooms.

We thought, when he first arrived, that we'd have to put him on a reducing diet to get his weight down  but wait for a few weeks until he was well settled. It turned out not to be necessary. He started racing about after the other two dogs and within a fortnight the weight started to drop off him. The more weight he lost the faster he could run so he is a slender dog now.

I must organise an 'after' photograph. The 'before' one has already been recorded. 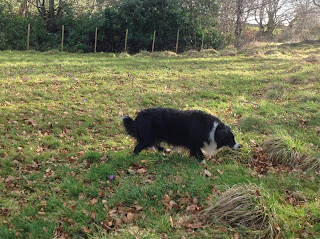 I think I need to follow Roy's diet. Good luck with your eyes

Thanks Nancy. Just up and about to get ready for my early train.

Good luck at the hospital today. I hope that the visit to Eye Casualty this morning, sorts things out for next week. Virtual healing hugs.

Thanks to everyone. Just back from RVH. Got steroid drops and am to attend for the procedure on Monday 11th as planned. Surgeon might decide not to go ahead but I've done all I can for now. And, by the way, the NHS is wonderful. Cherish it.

I'm glad today went well and good luck next Monday. I hope the drops give you some comfort until then.

I'm glad today went well and good luck next Monday. I hope the drops give you some comfort until then.

I tried racing about this week after several sedentary weeks with a cold, and i really ached all over. Tomorrow I will be more gentle with myself.