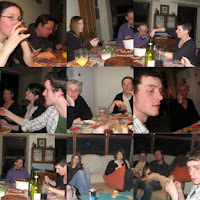 The cassoulet recipe was adapted (roughly) from Hugh Fearnley-Whittingstall's meat book. It was OK. I thought it was a bit stodgy but it got ate anyway. Swisser had three helpings. She's such a starvo.* The turnip soup was actually quite tasty although Hannah refused to lip it. The cake was scrumptious as always. At Mikey's request I made Nigella's Cloud Cake. It was intensely chocolatey and I think cried out for vanilla ice cream. I'll know for again. Bert asked for the Sicilian Orange and Almond Cake I'd previously made at Christmas and it was delicious too.

Apart from a brief shopping trip to Portglenone and a foray around the Mission (Im)possible charity shop (I got two patchwork quilts for fifty pee each) I spent the entire day cooking and baking. Everyone else went for a walk in the woods, pushed trees over and ruined their good shoes while Bonnie and I slaved over a hot stove.

As usual I nearly cut my finger off on one of Bert's over-sharpened knives.

Bert! Why do you have to make these knives so sharp. They're only for cutting vegetables not for performing open heart surgery.

All professional chefs say that you'll never cut yourself with a sharp knife only with a blunt one.

Bollocks. That wasn't a blunt knife I cut myself with. You could shave your legs with that bloody knife.

Put cayenne pepper on it. That will dry up the bleeding. I used to work in an Indian restaurant and that's what they did there.

Maybe our cayenne has lost its kick because it didn't really work.

* I can call Swisser a starvo because she says she never reads my blog. She says they can't get it in the university.

When I told Ploppy about my earthquake experience he poo-pooed it. But he said that Swisser would have an earthquake story too. Only hers would be more dramatic. Pictures would fall off the walls and her bed would rock. Sure enough she's only in the door and she's telling me about how she never got a wink of sleep the night before.

What do you think caused that then?

The bed was rocking all over the place and the walls were shaking. It must have been the earthquake!

But the earthquake was Wednesday.

I know. It must have been aftershocks.

Hard to believe that this woman is applying for a professorship.
Posted by Nelly at 9:08 pm

How very dare you! Drink! Whilst working with lethally sharp knives. As if. It's not Keith Floyd you call me.

Perhaps I protest too much for I might have had a glass of wine towards the end of the process.

My real problem is that I am almost blind for close up work. The specs don't work any more (they're fine for distance) and for really close work like reading I take them off. But there's a certain distance of around 18-24" where I cannot not see clearly whether the glasses are on or off.

People tell me bifocals are the answer and I'll get round to it someday.

Maybe when you are down to three fingers and only one thumb?
Get it sorted sooner rather than later, carpe diem , or something.