Up The Airy Mountain, Down The Rushy Glen 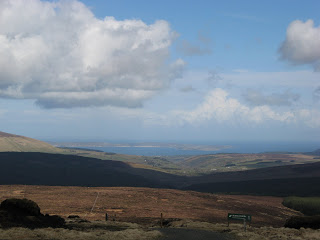 Saturday night Bert told me he’d got a great circular walk planned for the next day.

Other side of Clough.

What time is it?

Half ten. Time to get ready for our walk.

Yes. Remember we talked about it last night?

I don’t mind if you and Hannah want to take a walk without me. Really – you go on.

Thirty minutes later he’s making a big fuss about not being able to find a woolly hat. He only has about six of them.

You needn’t think I’m tramping about the top of a mountain with no pixie!

What’s wrong with the one you were wearing yesterday?

It’s too loose. My ears would be freezing. I’m not tramping about the top of a mountain with a wind gowling and my ears gowping!

Forty minutes later we’re driving on the other side of Loughguile. Bert is in possession of two good-fitting woollen hats and a bad attitude. I say,

So where’s this walk starting?

How should I know!

You’re the one had it all planned out.

You get us a walk then!

That would only confuse the issue. And stop bloody reading maps while you’re driving!

Fifteen minutes later Bert pulls up, gets out of the van and starts marching up an asphalt road. Paddy scampers happily at his heels. We’re on the side of a small mountain. Bert’s pixie is pulled firmly over his ears. The sun is splitting the stones. Bonnie and I vainly try to keep up with him. Actually Bonnie would have had no trouble keeping up but she’s loyal. Bert does not speak. His back looks very angry.

Half a mile later I say,

So when does the proper walk start?

How should I know?

Well fuck you anyway! I’m fed up with you! You can go on your own walk! I’m going back!

I turn on my heel and march back the way we came. Bonnie turns too. It’s my impression that Bert and Paddy march on. I do not turn to look. Bonnie and I climb up the airy mountain. Bert and Paddy stomp down the rushy glen.

I recover my temper at the top of Slieveanorra.

And by the time I meet Bert again he has recovered his.

On the way home a fellow white van man (talking on his mobile and driving one-handed on a narrow winding road) clips Bert’s wing mirror and smashes it. I am sympathetic. Privately I believe it is karma.

Later we realise that Bert had embarked on this walk without coffee or a smoke and as Hannah put it,

He wouldn’t even have been actually a human, would he?

Sounds typical of a coffee-free morning!

Hmm, you would never guess that you and Bert have combined age of 100+ years. I would have guessed it was more like 11 years based on this story.

Only a man in love would attempt a hike without his coffee!

Next time I'll make sure he gets his coffee. Next time we'll even bring some with us.

I recognise those senerios when I still lived at home. Katy